Could aliens be using Dyson Spheres around black holes to collect immense power? 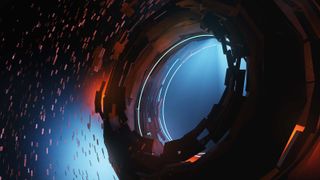 Scientists have upped the ante on theoretical Dyson Spheres with a proposal for alien civilizations constructing the colossal megastructures around stellar mass black holes, pushing the energy harvesting power well beyond what could be possible with just a traditional Dyson Sphere.

In a new study published in the Monthly Notices of the Royal Astronomical Society, researchers from Taiwan’s National Tsing Hua University (NTHU) dig into the energy output from a stellar mass black hole and found that the energy captured would be immense and would dwarf the amount of energy captured by their own sun.

“An accretion disk, a corona, and relativistic jets could be potential power stations for a Type II civilization,” the researchers write. “Our results suggest that for a stellar-mass black hole, even at a low Eddington ratio, the accretion disk could provide hundreds of times more luminosity than a main sequence star.”

A Type II civilization refers to the Kardashev scale, a way for astrobiologists and cosmologists to classify the potential energy available to extraterrestrial intelligences.

The issue seems almost well consigned to science fiction, but it is an important one when talking about the search for extraterrestrial intelligence (SETI). While predominantly focused on the radio signals produced by an alien civilization, the problem becomes what happens if an alien civilization is not broadcasting them for reasons of self-preservation (i.e., you can’t come and invade what you don’t is there).

That problem was what inspired physicists Freeman Dyson to postulate in 1960 that a sufficiently advanced alien race would reach the point where its energy needs exceeded what its planet was capable of supplying.

They would then move to harness the energy of its host star more directly by constructing platforms around their star in a form of biosphere that would absorb most of the star’s energy.

If such a megastructure could be constructed, it would significantly diminish the life of the star from our perspective, but would be lit up like Christmas lights in infrared. Even as this advanced alien civilization soaked up all that energy, they could not help but bleed off excess heat into space, lest their platforms melt entirely.

While Dyson wasn’t suggesting anything near what we now come to think of as a Dyson Sphere – where a star is essentially encased in an artificial construct like a kind of stellar matryoshka doll – the idea of something along these lines has captured the imaginations of the public and cosmologists alike.

Now, the NTHU researchers have figured that capturing the energy of a stellar mass black hole could provide as much as five times the amount of energy captured by a main sequence star, and might even be more visible as a result even using current telescopes.

Analysis: its fascinating to consider, but how plausible is this?

For starters, its hard to imagine what even a Type I civilization would look like. We’re talking about a civilization that would be able to harness the power of earthquakes, volcanos, hurricanes, and even the energy output of the Earth’s core all at once. We are hundreds of years out from such a feat if something like this is even possible.

A Type II civilization would have to be thousands of years beyond even that high threshold, and considering the incredibly unlikelihood of life developing on a planet orbiting a stellar mass black hole, much less one surviving long enough to achieve Type I status, any civilization building a Dyson Sphere around a stellar-mass black hole would have to travel from their host star to that black hole and construct one. That would almost certainly put them between a Type II and Type III civilization.

All that said, even though we imagine black holes as energy sinks rather than generators, that is not entirely the case. The area around the black hole is extremely energetic, with its accretion disk accelerating matter so fast that it radiated energy for brighter than a star.

Quasars, which are pretty much the energy being released in the immediate area around a supermassive black hole in the center of a galaxy, are the brightest objects in space, outshining all of the stars in the galaxy that contains them itself. While the jets speeding out from the poles of a stellar-mass black hole are nothing like those of supermassive black holes, the principle is the same, and the energy they represent is substantial. If you’re a Type II civilization, you’d get far more bang from your investment building a Dyson Sphere around a black hole than a typical main sequence star.

However, we’ve yet to even find traces of bacteria on another world, much less something this, well, epic in scale. But, the galaxy is an immense place with an estimated 400 billion stars in it. We’ve only been able to detect the presence of a few thousand exoplanets around alien stars. We’ve got a long way to go before declaring anything we can’t comprehend as impossible.