Drop's Newest Keyboards Contain Secrets for 'Lord of the Rings' Fans to Discover You've got two choices in Lord of the Rings keyboards, and they're both going to make any Tolkien fan very happy. 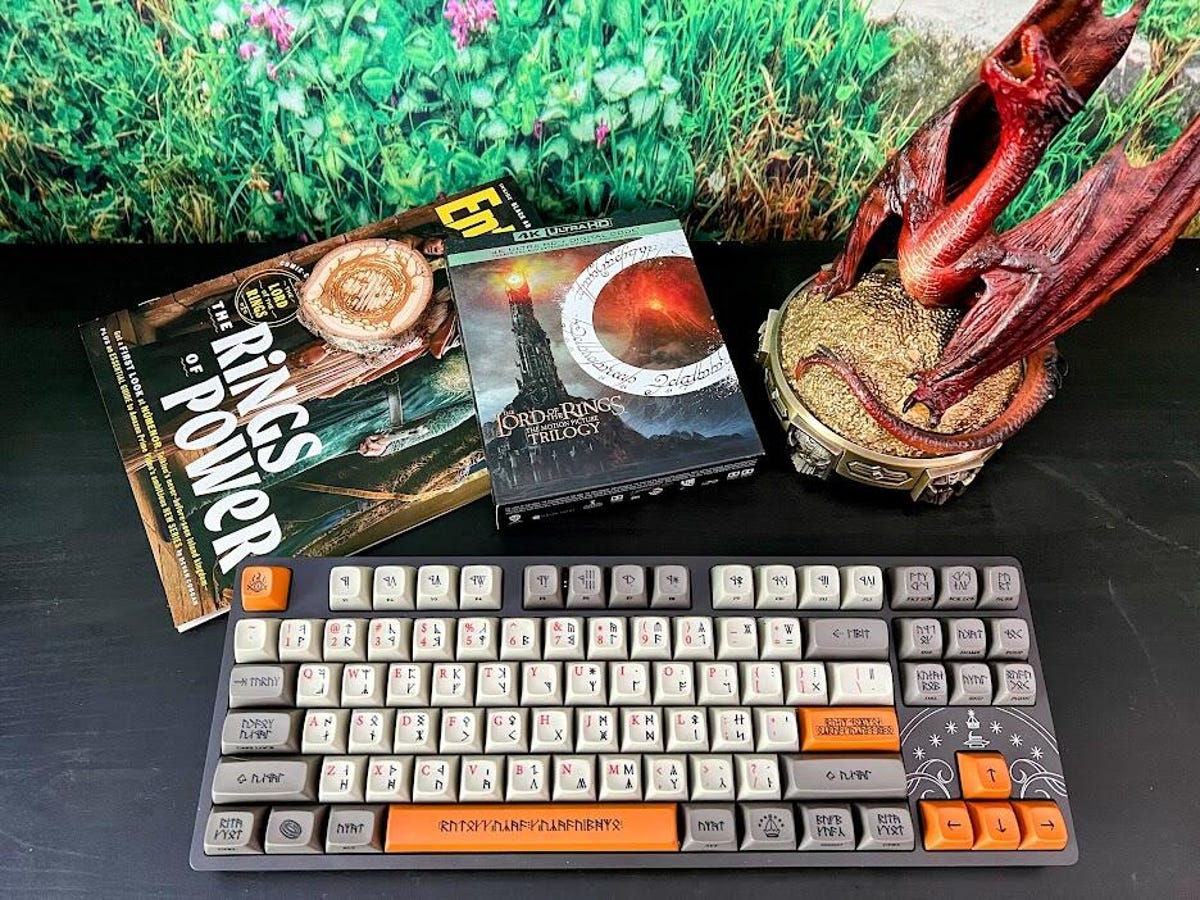 Between the Amazon TV series The Rings of Power releasing in less than a month, the animated film War of the Rohirrim expected in 2024 and Hobbit hole-style homes becoming increasingly popular on AirBnB, it’s clear Tolkien fans are having a moment. Joining the excitement is Drop, which today announced two new prebuilt, custom Lord of the Rings-themed keyboards shipping in time to live-blog your thoughts on the new show. I’ve been using both keyboards for about a week now, and as the resident Tolkien nerd at CNET, I have a lot to say about them.

It’s been about nine months since Drop had Lord of the Rings fans all over the world gleefully emptying their bank accounts for a pair of incredible and officially licensed keycap sets themed in either the Elvish or Dwarvish languages from the books and movies. These keycaps offer an incredible amount of detail and customization, but if you’re not already into custom-built keyboards these sets can be fairly intimidating. Lots of folks just want to buy a keyboard and use it, so today Drop is offering exactly that. Mechanically, these keyboards are a custom version of the Drop ENTR keyboard with Holy Panda X switches and Drop Phantom stabilizers. That means the keyboard has a nice audible clack to it but isn’t so loud that the other people in the office or at home will have something to say about it. The keycaps themselves have a soft finish and a nice cupped surface so you’ll be comfortably typing on it for hours without the fatigue associated with average keyboards.

Each of these USB-C keyboards is absolutely beautiful to look at and offers a few simple customizations in the box for some color variety. The custom etched designs on the right side of the keyboard are only available with this set, and not something that can be purchased separately if you already own the Lord of the Rings keycaps from last year. More impressive than the color tones and not-so-subtle nods to the books is how much work went into the language on the keys to be more than just the standard English words transliterated into Elven Tengwar or Dwarvish Cirth symbols. Many words on an English keyboard have no translation to a fantasy language conceived before computers, so things like Caps Lock become Pedi Caun, which is Cirth for “speak loud.” The entire keyboard has translations like this, designed for the user to discover on their own.

Like the keycap set before it, the characters you see on the keyboard line up with the Cirth and Tengwar computer fonts originally built by Daniel Steven Smith in 1998. Old school Tolkien fans may remember these fonts drew some conflict from the Tolkien Estate, which asked Smith to remove these unofficial fonts from his site, but they live on as the most complete font sets for Cirth and Tengwar available today by way of a host of free font sites. If you install one of those fonts and type as though you’re writing for those languages instead of English, which you can see an example of here, you’ll get some of the most accurate script possible from keyboard to screen.

Beautiful as these keyboards are, there are a few quirks. Drop’s ENTR keyboard is backlit, but the keycaps themselves are not doubleshot keycaps that let light pass through. According to Drop, this is because the dye sublimation process used to make sure the keys stay as pretty as they are right now through years of use doesn’t work well with doubleshot keycaps and a choice had to be made. The result is a nice accent light during the day but a keyboard that is not nearly as fun to look at when the lights are off.

My other issue with this keyboard is really more of a minor design dispute. The Elven keycap set includes a broken sword on the Return key which, if you ask any 10 people who have read The Lord of the Rings and seen the movies, would be identified as Bilbo’s Sting and not Elendil’s Narsil. According to Drop, this design decision came from a desire to be loyal to the books and not the movies. I don’t agree this visual is more accurate than what was shown in the films — they’re both incorrect in different ways — and for the most part, that’s OK. Tolkien never offers a complete description of the sword in the books so both examples are artist interpretations. If I start going off about Oakeshott Typology and what makes a long sword different from a short sword in design, it would end up being a wholly different 2,000-word article that has nothing to do with these otherwise great keyboards.

If you’re a Lord of the Rings fan and you’ve been looking for an excuse to add a wired mechanical keyboard to your computer, you’re unlikely to find anything better than these anytime soon. The keys feel great, the colors and designs are exceptional, and this is one of the nicest-looking keyboards you’re going to find without spending considerably more than the $200 Drop is asking for each of these. And after the explosive popularity of the original keycap set from last year, Drop assured me it’s ready to deliver a significant volume of these with plans to ship by late September or early October, depending on when you order.