Dune cast, release date, story and everything we know 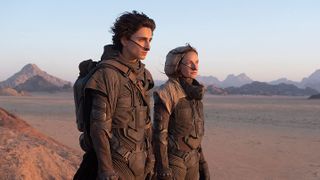 2020’s Dune movie has nothing to do with David Lynch’s 1984 then-flop, now-cult classic. Instead, it’s a brand new big-budget adaption that will cover the first half of the 1965 novel by Frank Herbert, one of the most acclaimed science-fiction works ever written. But while you can get your first look with the bewitching trailer below, it looks like we’ll have to wait until late next year to properly see it due to uncertainty in the film industry and the coronavirus.

And the wait is going to be tough: given the sheer scale of the worlds Herbert created, director Denis Villeneuve (Blade Runner 2049, Arrival), speaking to Vanity Fair, said he “would not agree to make this adaptation of the book with one single movie. The world is too complex. It’s a world that takes its power in its details.”

2020’s Dune features an all-star cast, with Timothée Chalamet, Oscar Isaac, Rebecca Ferguson and Javier Bardem. Here’s what we know about this enormously promising new Dune adaptation, including the latest on its release date delay, how it differs from previous efforts, and more.

The original Dune release date was December 18, 2020, but it’s now been pushed back to October 1, 2021. It wasn’t exactly surprising given that Wonder Woman 1984, from the same studio was recently delayed to December 25, 2020, and that Dune has was moved to the same October set for The Batman.

That original date held for a while despite the coronavirus outbreak: filming in Hungary and Jordan already wrapped last year, with the film now presumably in the final stages of post-production. But with the uncertainty in the wider film industry of late and major cinema closures – that has seen No Time to Die and Black Widow both shifting – the 2020 release date calendar is getting quieter.

Here’s your first proper look at Dune, and it’s shaping up to be a promising and faithful adaptation of the first half of the source novel. It’s not just sand and sandworms, either: We see the pain-inducing box, the poison-tipped Gom Jabbar, plus sweeping shots of Paul’s home plant Caladan, and his adopted home of Arrakis.

But the thing everyone is talking about is the massive worm. Speaking to EW, Villeneuve explained that “when we were creating the worm I tried to create a lifeform that you will totally believe can go and survive in this land.” He added that “it was important for me to understand that this huge creature has a soul, to understand that it is revered as a god-like figure.”

Dune should be a terrific sci-fi movie, based on the credentials of its director. Having previously made Arrival and Blade Runner 2049, director Denis Villeneuve appears to be a perfect fit for the gigantic, Kubrick-esque scope that a saga like Dune demands.

The script for Dune was co-written by Eric Roth (The Curious Case of Benjamin Button, The Good Shepard) and Villeneuve. Jon Spaihts (Passengers, Doctor Strange, Prometheus) started as co-writer, but left the project to focus his efforts on the Dune sequel.

Villeneuve has employed several of his Blade Runner 2049 alums to bring the film to life, as well as tapping the legendary Gerd Nefzer (Iron Man, The Matrix Reloaded, Gladiator) as special effects supervisor. Greig Fraser (Vice, Rogue One, Foxcatcher, Zero Dark Thirty) is the movie’s cinematographer. The first photos of the film are extremely moody, and a world away from Lynch’s version.

Hans Zimmer will compose the score for Dune, a decision the composer didn’t make easily as he was forced by scheduling to choose between this movie and long-time collaborator Christopher Nolan’s upcoming Tenet. The languages of Dune will be handled by none other than Game of Thrones language creation expert David Peterson.

Dune is, above all, a grand, elaborate space opera. Set 10,000 years into the future, a feudal empire known as the Imperium rules the galaxy. Paul, the only son of prominent Duke Leo Atreides, must battle against the evil Baron Harkonnen, as well as fight for his life on the inhospitable planet of Arrakis, a dune-covered planet complete with terrifyingly gigantic sand worms.

Dune begins with Paul and his family being relocated to Arrakis to take over management of the dangerous mining of ‘the most important substance in the universe’ – melange. Melange, known also as ‘spice’, is a unique drug that not only extends life, expands consciousness and prevents disease but also allows for ‘faster-than-light’ space travel.

For Villeneuve, also from his chat with Vanity Fair, Herbert’s epic remains as relevant as ever. “No matter what you believe, Earth is changing, and we will have to adapt,” he said. “It [Dune] was a distant portrait of the oil and the capitalism and the exploitation – the over-exploitation – of Earth. It’s a coming-of-age story, but also a call for action for the youth.”

Once on Arrakis, Paul begins to manifest powers identifying him as the prophesized savior of the indigenous inhabitants of Arakkis, the Fremen. Together with the Fremen, Paul seeks to overthrow the Empire and take revenge on the corrupt Imperium, not only for himself and his family, but for the Fremen, who have chosen him to be their champion.

When it comes to Paul’s mother, Lady Jessica, the “warrior princess” has an expanded role from the books. Played by Rebecca Ferguson, the Bene Gesserit is even more fearsome than the character in the books. “She’s a mother, she’s a concubine, she’s a soldier,” Ferguson told Vanity Fair. “Denis was very respectful of Frank’s work in the book, [but] the quality of the arcs for much of the women have been brought up to a new level.”

That isn’t the only change to the source material, either. Doctor Liet Kynes, the leading ecologist on Arrakis and power broker, will now be played by a black woman (Sharon Duncan-Brewster), rather than a white man. “This human being manages to basically keep the peace amongst many people,” Duncan-Brewster said to Vanity Fair. “Women are very good at that, so why can’t Kynes be a woman? Why shouldn’t Kynes be a woman?”

A prequel TV show set in the Dune universe is coming on HBO Max, too

As well as a sequel being already worked on ahead of Dune’s initial release, it has been announced that a prequel series will be developed as an accompaniment to the movie, made exclusively for new streaming service HBO Max. Dune: The Sisterhood is a series that will focus on the mysterious Bene Gesserit order, and while we know who’s making it, we don’t know who’ll be in the cast yet.

Villeneuve has confirmed that he will be directing the pilot as well as serving alongside screenwriter Spaihts and Brian Herbert as executive producers. So it’s a legitimate part of the movie’s universe.

Dune 2020 is nothing to do with Lynch’s movie

Villeneuve stressed to Yahoo that his Dune “will not have any link with the David Lynch movie. I’m going back to the book, and going to the images that came out when I read it.”

That’s no surprise, really, and don’t expect a cameo from that movie’s star Kyle MacLachlan. When asked if he’d appear by IndieWire, he told them it wasn’t happening.

This idea has been seconded by cast members such as Oscar Isaac, who told Collider that Villeneuve’s Dune will be “truer to the novels”, describing it as “shocking, scary and visceral” and “a wholly, wholly different thing”. Stellan Skarsgård, who will play the main antagonist of Baron Harkonnen, attempted to distance Dune’s production from that of corporately-controlled ‘studio films’ – arguing that Villeneuve is a “true filmmaker” who has been given a large amount of creative control. That bodes very well.

Will Dune 2020 be truly different?

Our hope is Villeneuve is making the adaptation that Herbert’s work has always deserved. The decision to split the books is also promising, albeit standard fare for our sequel-ridden cinema landscape, and suggests that maybe, just maybe, we might get something different from this version of Dune. The moody first images of the movie are gorgeous, too. We can’t wait to see how this looks in motion. It’s the kind of big-budget sci-fi movie that’ll really fill the void with Star Wars taking a few years off.