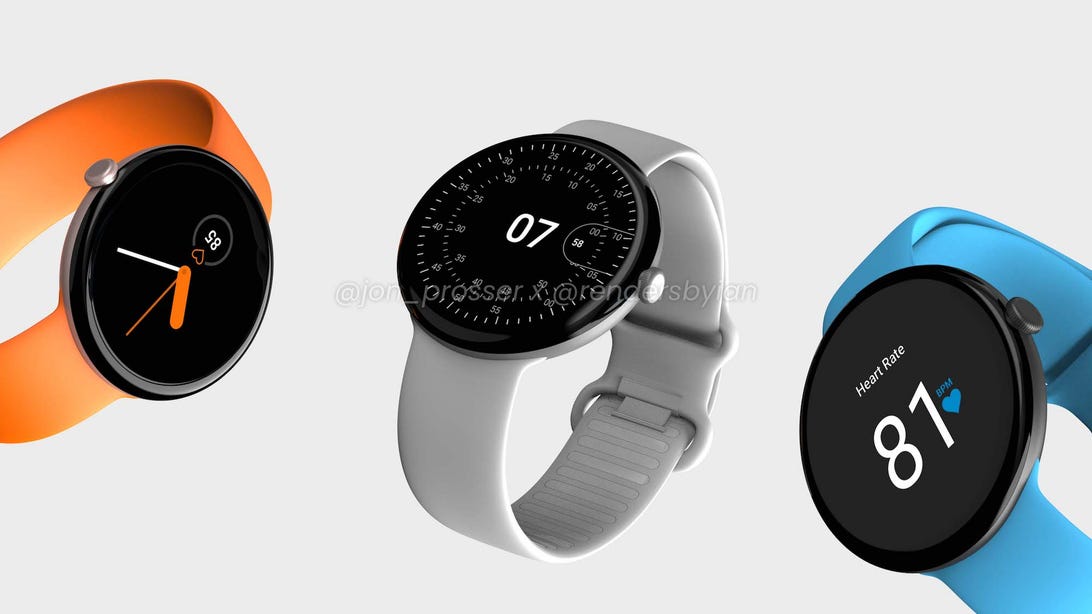 A Google-branded smartwatch has yet to appear, even though the software giant owns Fitbit and makes software for Android-powered wearables from companies like Samsung and Fossil. However, that appears to be changing soon. Rumors, leaks and reports about the watch point to its arrival sometime this year. It may even look familiar, as purported renders and leaks of the device suggest a round, minimalist design (and Fitbit integration, too).

A Google smartwatch could do for wearables what the company’s Pixel and Nexus devices have done for smartphones. Those products gave Google the opportunity to show what the ideal Android experience should be like on phones. A Pixel Watch could let Google do the same for smartwatches.

Although rumors about a Pixel Watch have circulated over the years, many details about Google’s reported plans for its own smartwatch are still unclear. That being said, there’s a lot we can infer about Google’s approach to smartwatches based on its new version of Wear OS and acquisition of Fitbit.

Here’s a closer look at what we might see from Google’s Pixel Watch.

The Pixel Watch may launch in the spring or fall

Google could launch the Pixel Watch this year, according to Insider. The device may debut in the spring, but that’s subject to change based on how internal testing goes, the report says. YouTuber Jon Prosser suggests Google will tease the Pixel Watch in May at Google I/O before formally launching the device in October. He previously said the Pixel Watch would launch on May 26.

Google I/O is generally considered to be the company’s biggest event of the year. The company often uses this developer conference to announce new products and software updates, although it usually saves hardware like Pixel phones, Pixel Buds and new Nest products for smaller press events in the fall.

Read more: Why I’m More Excited About a New Apple Watch SE Than the Series 8

It will likely be called the Pixel Watch

It could have a round design

Google’s Pixel Watch will likely have a circular face with a minimalist look, similar to the Samsung Galaxy Watch 4. That’s according to a supposed render of the Watch shared by Evan Blass of 91Mobiles. Along with the familiar design, the render also shows Fitbit integration.

It’s not the first time we’ve seen images claiming to show the Pixel Watch’s round design. In December, leaked images that reportedly show Google’s marketing materials for the Pixel Watch were published by Prosser. The tipster also posted renderings last April showing the watch, which he says were based on leaked images of the actual Pixel Watch that he received from a source.

If these images are accurate, it looks like the Pixel Watch could have a crown for navigation similar to the Apple Watch and a design without bezels or buttons. Google may also offer changeable bands that are specific to the Pixel Watch, say the reports from Prosser and Insider. Android Central’s reportedly leaked images also indicate the watch will likely have a crown and Google-specific bands.

Variety appears to be important to Google, considering the company might release its Pixel Watch in three different versions, according to German tech blog WinFuture. But that report dates back to 2018, so it’s unclear if those details are still accurate.

We also don’t know what the difference between those three models will be. It’s possible that the watch could come in three different sizes, for example, or that Google is launching a specific model with cellular connectivity.

One way Google’s Pixel Watch models could differ is in colors, as well. The Pixel Watch is said to come in black, gold and gray versions with 32GB of storage, according to a leak via a carrier’s inventory system reported on Android Police.

It will likely have health tracking features

Google’s smartwatch will at least offer basic health tracking like heart rate and step counting, according to the reports from Prosser and Insider. However, given the big focus on health that we’re seeing across the smartwatch industry, I imagine we’ll see more advanced metrics as well.

We don’t know anything for certain yet, but there are plenty of possibilities based on Google’s other recent moves. For example, Google said that Wear OS will have “the best of Fitbit” when it announced its new smartwatch software back in May, so we can likely expect to see more Fitbit features. Insider’s report provides some evidence of this direction, as it says Google is working on a specific Fitbit integration for Wear OS that will debut with the watch. However, we don’t know anything else about what that could entail yet.

We also know that the Google Nest Hub 2 can detect snoring and monitor breathing at night, so it wouldn’t be surprising to see these features incorporated into the Pixel Watch in some way. But given Fitbit’s recent focus on Premium, there’s also a chance that more sophisticated health features on the Pixel Watch could require a subscription.

Like the Apple Watch, the battery in Google’s smartwatch
might only last for about one day. An internal feedback document referenced in Insider’s report suggests the watch might have to be charged daily. However, there’s always a chance Google could improve this before the watch actually launches.

Read more: These Smartphones Are Coming This Year and We’re Excited

The Pixel Watch will run on Wear OS

Google introduced its revamped Wear OS smartwatch platform, which it developed in collaboration with Samsung, at Google I/O 2021. So it seems almost certain that the Pixel Watch would run on this new software, which promises to bring faster performance, a more intuitive user interface, and better integration with Google and Fitbit services.

Samsung’s Galaxy Watch 4 already runs on the new Wear OS, so the Pixel Watch wouldn’t be the first. But it could be the smartwatch that Google points to as being the blueprint for the Wear OS experience that third-party companies could build on, just as Pixel phones have done for Android devices. The Galaxy Watch 4 runs on Wear OS, but a lot of features are still tied to Samsung’s own apps and service, as my colleague Scott Stein wrote in his review.

While the leaks have given us a baseline of what to expect from the Pixel Watch, a lot of important details are still unknown.

We don’t know how much the Pixel Watch could cost, for example. We also don’t know anything about the chip that would power it yet, which is especially important given the debut of Google’s new Tensor chip in the Pixel 6 and Pixel 6 Pro. The older report from WinFuture says Google was working with Qualcomm on the Pixel Watch, so there’s a chance we could see Qualcomm’s latest wearables chip.

Even the rumored name, Pixel Watch, could shift. Insider’s report says Google has been referring to the watch by a few different names and it’s unclear what branding it may choose. The trademark application, however, provides some indication that Pixel Watch may end up being the official title.

Device compatibility is also up in the air. Earlier watches that ran Google’s Android Wear platform are compatible with both Android and iOS, allowing iPhone users to pair up with watches running Google’s OS much like how Fitbit devices work on both platforms. But the Galaxy Watch 4 launched as an Android phone-only experience, raising questions as to whether future Wear OS devices will support iOS for those looking for an Apple Watch alternative.

My biggest question is whether the Pixel Watch will have Google-specific features similar to its Pixel phones. Google has found creative ways to incorporate Google Assistant into the phone experience on Pixel phones, so I’m hoping it can do the same for its Pixel Watch.

For more, check out all the rumors we’ve collected for Google’s Pixel 7 and Pixel Fold phones. You can also read up on everything to know about Google I/O.