HoloKit X Showed Me How an iPhone Can Turn Into an AR Headset for $129 This pair of mirrored goggles is a great reminder that now would be a perfect time to make the Google Cardboard of AR devices. 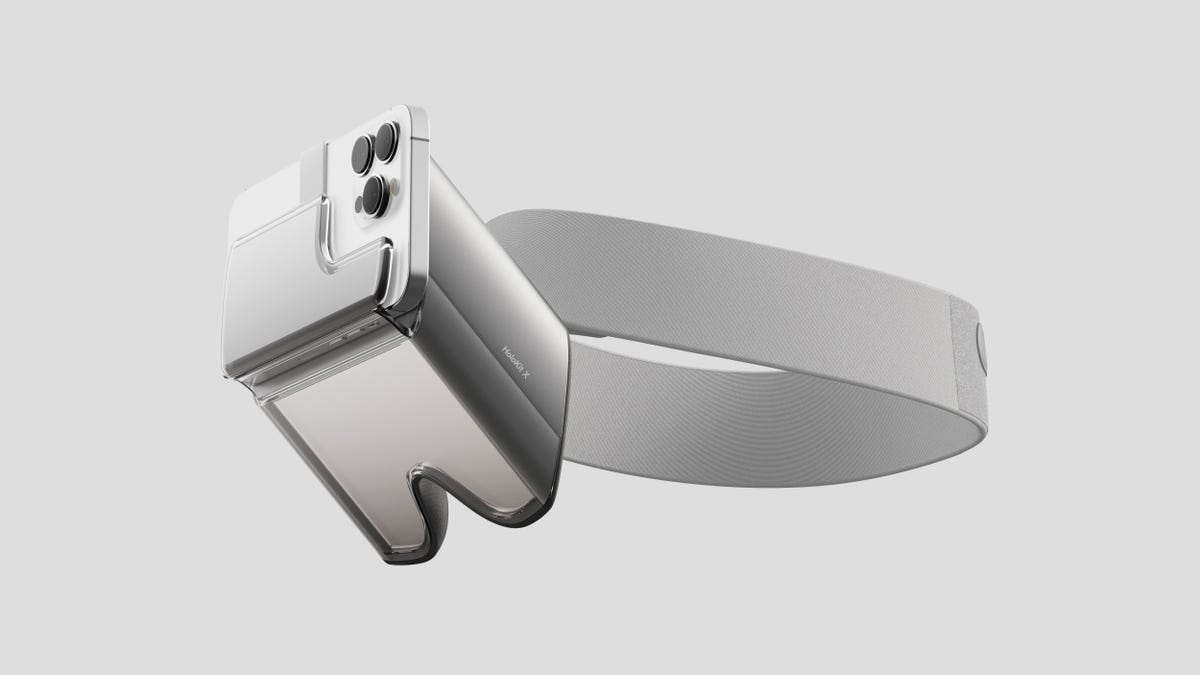 Before VR was a thing you could easily get in any Target or Best Buy, companies like Samsung and Google sold little goggles you’d drop your phone into to see cheap, but surprisingly effective virtual images. Using the HoloKit X brought me back to that time nearly a decade ago, but now it’s for AR. The simple visor and headband uses a wide variety of iPhones to lean on their built-in AR capabilities, creating head-up images I can see on my face.

I tried a few demos of HoloKit X in an NFT gallery in New York, guided by its creator, Amber Hu. The Holokit concept has been something Hu has worked on for years, but the latest headset is one that Hu feels is ready to work because of how advanced devices like the iPhone have become.

My demos were a mixed bag. I did see 3D things, like a glowing Buddha made of flowing dots, appear in front of me. HoloKit X works with hand tracking, so I could even hold my hands out to “touch” the 3D object. The headset triggers the iPhone to vibrate, so I felt a buzzing feedback on my face that didn’t feel as weird as you might think.

I found that objects didn’t stay in place all the time, though, sometimes drifting a bit. Hu says that’s due to the iPhone processor being taxed hard, and is working on solutions to optimize the experience (it was better for me when standing still).

Even so, technically the headset can do full-movement tracking using the iPhone cameras, similar to how a VR or AR headset would with its built-in headset cameras. Hu wants to ambitiously go even further, using the Apple Watch as a motion tracker for certain apps (the one where I used my magic wand to swipe attacks used the Apple Watch for gesture recognition). Spatial audio, even moving through spaces, can work while wearing AirPods.

The headset is nothing more than a phone holder combined with an angled reflective visor that mirrors the iPhone display down into my view: OLED display iPhones like mine can create AR effects with perfect transparency when the display is black. The phone automatically orients and connects to the goggles using NFC, and an exposed strip of display above the goggles’ top edge cleverly works as a touch display to launch or exit apps, or even have extra controls. The elastic headband on the goggles stretches over my big head reasonably well, and the rubber-lined eyepieces fit over my glasses without applying too much pressure.

The whole idea, knitting together iPhones, the Apple Watch and AirPods into an AR headset experience, feels exactly like where I’ve imagined Apple heading with its expected AR headset — except the Holokit X is doing it now, and for just $129. Granted, the experience right now feels like “you get what you pay for,” and it’s hard to tell how many apps will work with this headset in the future (Hu insists the headset is not actually a developer kit, and instead will be a product that leans on interested art and content partners to make experiences). Right now, the HoloKit X app that I tried on TestFlight and will be available in the App Store at the end of the month only has nine experiences, which Hu calls “Realities.” Hu sees shared AR experience as being like rule sets, and shared experiences being the main goal of where HoloKit X could head.

Sharing seems like the headset’s most interesting strong suit. The app-like Realities could be played with by multiple people at the same time with other headsets, or with their phones using the app. The app can show these experiences live, so anyone else in the room could see the AR experience as it’s being used by others. The app can also record and share that video, layering AR effects with people to create mixed reality that’s hard to create on other AR headsets at the moment.

While HoloKit X seems like a work in progress, it also makes sense to me. Any art galleries trying to develop AR experiences could use little goggles like these for visitors instead of investing in expensive headsets. The app’s cross-support of regular phone AR also means the headset part could be optional – which is exactly the speed of where most casual AR explorers are these days.

As more AR headsets start to inevitably arrive in the next few years, HoloKit X asks that same interesting question Cardboard and Gear VR and Daydream asked years ago…can we make these experiences happen even more casually? Maybe the answer has been right in our phones all along.