How to watch Nancy Drew season 2 online: stream every new episode from anywhere 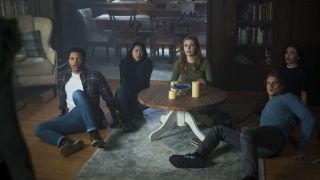 Rebooted detective show Nancy Drew returns for a second season, promising another large helping of twists and turns The show’s reimagining of the long-running teen crime fighter novels by Carolyn Keene proved a decent hit last time out, with the CW show offering a modern, grown up take on the mysteries in the fictional town of Horseshoe Bay. Read on to find out how to watch season 2 online and stream every new episode, including for free in some places.

The new series once again stars Kennedy McMann as Nancy Drew, who, alongside her friends, Ace, George Fan, Bess Marvin, and Ned Nickerson, aim to get to the bottom of some spooky goings-on in the otherwise sleepy district in Maine after becoming prime suspects for a crime they did not commit.

The new season kicks off with Nancy and the rest of the Drew crew dealing with the fallout of Owen’s (Miles Gaston Villanueva) unexpected death as a result of not living up to the bargain they made with the mysterious Aglaeca sea spirit. Detective Tamura, meanwhile shows up at The Claw restaurant to bring Nancy in for questioning amid an investigation into a comatose girl’s assault.

Alongside all this drama, the new series also introduces a new love interest for the red-headend crime solver in the form of Gil Bobbsey (Praneet Akilla) – one half of a reimagined version of the book’s Bobbsey Twins, with Gil making his debut alongside his twin sister, Amanda (Aadila Dosani), in tonight’s season premiere.

Follow our guide below as we explain how to watch Nancy Drew online and stream every new season 2 episode.

While the ongoing pandemic means that international travel might be limited, it’s still possible for many of us to visit countries on government ‘approved travel’ lists. For those abroad on business or getting some winter sun when Nancy Drew: Season 2 airs its final episode, you’ll be unable to watch the sci-fi mainstay conclude its epic run due to annoying regional restrictions.

Use a VPN to watch Nancy Drew season 2 from anywhere

Those with a cable subscription can watch the Nancy Drew season 2 premiere live on The CW at 9pm ET/PT on Wednesday, January 20. However, it’s only airing on linear TV at the time, becoming available for streaming a few hours later on Thursday, January 21.

When it does, the good news is it’s 100% FREE to watch Nancy Drew season 2 online via The CW website – you don’t even need to register, just press play!

Of the many options, we recommend FuboTV for fans of Nancy Drew, as in addition to offering The CW as part of its core package of more than 100 channels, it also gives you a  1-week free trial – again making it’s possible to watch Nancy Drew free online. Should you like what you see and decide to keep it, the  cable replacement service costs $64.99 a month thereafter.

Outside of the US? Watch the Nancy Drew season 2 just like you would at home by summoning the powers of a good VPN.

How to watch the Nancy Drew season 2 online in Canada

Nancy Drew is being shown by the W Network in Canada.

Shown in tandem with the US, new episodes go out on Wednesday’s at 8pm ET from January 20th.

In order to watch online, navigate to the official W website and log in with your TV provider.

Those with W Network wanting to log-in to watch the service from abroad will need to download a VPN to connect like they would at home and usurp any geo-blocking they may encounter.

Can I watch Nancy Drew season 2 online in the UK

While Channel 4 often picks up much of the CW’s output for the UK, no broadcaster in Blighty has so far picked up the option to show the Drew Crew’s adventures for the region.

To make matters worse, the show isn’t available in the UK via regular VOD providers like Amazon Prime Video.

The only alternative is to use one of our best VPNs as described above, set your location to a country on this page that is broadcasting and go from there.

How to watch Nancy Drew season 2 free online in Australia

Free-to-air Network 10 aired the first series of the Nancy Drew reboot in Australia, but as of yet there’s no confirmed broadcast date for season 2 Down Under.

Neverthless, the station is currently still offering the first series of the show on its catch-up streaming service 10Play.