How to watch Snowpiercer season 2 online: stream every new episode from anywhere 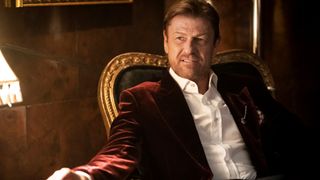 Full speed ahead! Season 2 of this high-octane, post-apocalyptic drama starring Daveed Diggs, Jennifer Connelly, and the one and only Sean Bean is pulling into a streaming platform near you. And, as a new power struggle threatens to engender civil war on board, it should induce more clammy palms than the sight of the ticket inspector! Here’s how to watch Snowpiercer season 2 online and stream every new episode wherever you are right now.

Based on the 1982 French graphic novel Le Transperceneige, which subsequently inspired Bong Joon-Ho’s 2013 film, Snowpiercer follows the inhabitants of a high-tech train that perpetually circles the globe after an event called the Freeze made Earth uninhabitable. But unfortunately, the 1001 carriage train has reproduced all the inequalities of a class-based society – and this brutal divide has dire consequences.

Diggs returns as Andre Layton, an ex-detective who led the rebellion against First Class, and Connelly is back as Melanie Cavill, who does whatever necessary to prevent hell breaking loose aboard. But the surprise arrival of Mr Wilford – the revered billionaire benefactor of Snowpiercer – looks to reignite divisions between passenger’s loyal to Layton, and those beholden to the grandiose myth of Mr Wilford.

With Big Alice latched on to Snowpiercer, there’s a whole new train to explore – full of dark promise and new characters. Rowan Blanchard reprises her role as Melanie’s daughter Alex, long believed dead, while new cast members include Damien Young and Sakina Jaffrey, Chelsea Harris as a covert operative, and Tom Lipsinki as a bureaucratic member of hospitality.

You can catch every episode of this propulsive drama with our guide below, which explains how to watch Snowpiercer season 2 online and stream every new episode wherever you are in the world.

Is Snowpiercer on Netflix?

Yes – but not universally.

While many major Netflix markets like the UK, Canada and Australia are home to Snowpiercer and all-new season 2 episodes, it’s not available on Netflix US due to TNT’s exclusive broadcast rights to the show.

How to watch Snowpiercer season 2 from outside your country

Any who find themselves abroad will likely discover they’re unable to watch Snowpiercer season 2 like they would at home, due to regional restrictions.

Luckily, there’s a simple solution in the form of a VPN. It’s a simple bit of software which alters your IP address, allowing you connect to your IPTV service in your home country, and therefore stream your favorite shows live or on-demand no matter where you are.

ExpressVPN – get the world’s best VPN
While there are hundreds of VPNs to choose from, we always recommend ExpressVPN. As well as being fast, intuitive to use, and straightforward to install, it’s also compatible with a plethora of devices – Amazon Fire TV Stick, Apple TV, Xbox, PlayStation, and iOS and Android, to list just a few.

ExpressVPN’s flexible 30-day money back guarantee is difficult to argue with too. But, even better, you can purchase an annual plan for a 49% discount and 3 months extra FREE – a brilliant offer for an essential bit of kit.

Once installed, just select the location of your home country and click connect. Boom! You’ll now be able to watch Snowpiercer season 2 online, and enjoy this explosive drama from TNT from anywhere.

How to watch Snowpiercer season 2 online in the US

Fans of addictive dystopian sci-fi will want to tune in to TNT for new Snowpiercer season 2 episodes from Monday, January 25 at 9pm ET/PT, and 8pm CT.

For those without cable, there are plenty of ways to watch TNT online, too.

The most affordable is Sling TV, where you can watch TNT programming with either a Sling Blue or Sling Orange subscription. They’re both $30 a month. If choosing, the Orange option has fewer channels, but more sports content, while Blue has about 50 channels, providing more news and entertainment. You can get both for $45 a month – and currently try a FREE Sling TV trial or get $10 off your first month instead..

As we’ve already mentioned, none of these services will work if you’re trying to access them from another country. However, downloading a VPN will allow you to change your IP address, and so watch Snowpiercer season 2 online just like you would at home – only from anywhere in the world

How to watch Snowpiercer season 2 online in the UK

Snowpiercer is coming back to Netflix just one day later in the UK, with new season 2 episodes available to watch from January 26 at 8am GMT. A subscription to the streamer is £5.99 a month, and new episodes will be added every Tuesday.

However, regional restrictions will prevent you from connecting to your account or Netflix region from abroad – and not every Netflix region features the same content as the UK.

So, if you want to stream Snowpiercer season 2 live or as episodes become available, consider purchasing a VPN. Not only will you be able to watch your favorite TV away from home, but they help protect your online information too.

How to watch Snowpiercer season 2 online in Canada

It’s Netflix all round, with the service picking up international streaming rights back in 2018. A basic subscription to the platform is CND$9.99, and new episodes will be available every Tuesday from January 26.

How to watch Snowpiercer season 2 online in Australia

Aussie drama fans will also find their fix of Snowpiercer season 2 on Netflix with new episodes – there are ten in total – available weekly from January 26. Registration costs AUS10.99 for a basic membership, and offers one standard definition stream.

Those currently abroad will need to download a VPN , which means you’ll be able to get your favorite TV with you, wherever you go.