HP Pavilion Plus Laptop (14-inch) Review: Budget OLED Beauty It's hard to believe the HP Pavilion Plus is under $800, yet well configured with an OLED display. Too bad about the battery life, though. 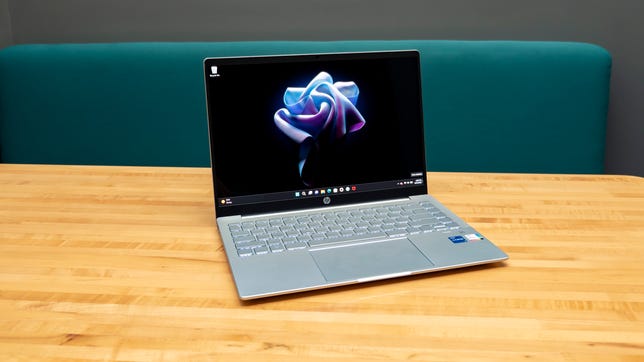 The 14-inch HP Pavilion Plus is a rare example of a laptop where you’re actually getting more than you’re paying for. The Plus, as the name implies, is a bit extra compared to the regular Pavilion laptops. In this case, you get features such as a body made of recycled aluminum, a 5-megapixel webcam, strong Intel Core i7 processing performance in our benchmark tests (even outpacing the latest MacBook Air in a couple of tests), and it’s topped off with a beautiful OLED display.

The OLED display, while great for productivity and entertainment, hurts battery life some, unfortunately. And you’ll probably want to remove much of the preinstalled software HP has packed in. But otherwise, the HP Pavilion Plus 14 is an amazing value.

Pavilion is HP’s budget-friendly midrange line; not quite as full-featured as its Envy PCs but a notch above its entry-level models called simply HP Laptops. The Pavilion Plus combines some higher-end hardware, including an option for entry-level discrete graphics and a few features you won’t find on a regular Pavilion, for example, a 720p HD camera compared to the Plus’ 1080p webcam.

You won’t find a 2.8K OLED display as an option on the regular Pavilion laptops, either. Compared to the typical LCD you’d find on a Pavilion and other sub-$1,000 laptops, an OLED display has a higher contrast ratio, sharper text, more vivid colors and a wide color gamut covering 100% DCI-P3 color space. The configuration I tested also came with a high-performance 12th-gen Core i7 processor and 16GB of memory, coming in at a regular price of $1,000. However, it’s regularly on sale; it’s currently only $800. In the UK, the Pavilion Plus starts at £799 and in Australia it’s AU$1,599.

For its price, the Pavilion Plus 14 turned out great performance both in general use and on our benchmark tests (the results of those are at the end of this review). This is an excellent pick for school and office work, entertainment and gaming at low graphics settings or, better yet, cloud gaming. The HP actually outperformed the MacBook Air M2 on several benchmarks.

If you’re considering this HP for content creation, you’ll want to configure the Pavilion Plus 14 with its optional Nvidia GeForce RTX 2050 discrete graphics. It’s an entry-level chip but it’ll speed up rendering times compared to the integrated graphics in my review laptop. And it doesn’t even add too much to the price. Graphics performance is where it falls short compared to the Air along with battery life, and by a lot.

OLED displays might look great but they are generally power drains. The Pavilion Plus only reached 4 hours, 40 minutes on our streaming video test with the display brightness set to 50% and audio played through earbuds with volume set to 50%. There are things you can do to help such as keep your brightness as low as possible and use Windows’ dark mode. Even in general use with some power management, I averaged about 6 hours of use before I needed to plug in. The positive here is the HP charges quickly, getting back up to 50% charge in 30 minutes.

The rest is really pretty great for its price, with just a couple of nitpicks. The webcam is way better than what you would’ve found at this price a couple of years ago. The picture is sharp and detailed and, if you don’t have enough light, HP’s Enhanced Lighting app turns part of your display into a ring light. HP also has another app, Duet, that allows you to use a tablet as a secondary display wirelessly.

However, for every Enhanced Lighting and Duet app, there’s something you’ll likely want to remove like ExpressVPN, McAfee Personal Security, WildTangent Games and Booking.com. Yes, it’s how HP is able to keep the price low, but expect to deal with pop-ups and other annoyances until you uninstall everything you don’t want.

There’s only one other quibble and that’s the absence of kill-switches for the camera and mics. Maybe those are reserved for the higher-end Envy and Spectre lines; you’ll definitely find them on those models. That’s understandable, but with the high-res webcam, it also makes sense to include them on the Plus model. Instead, HP put a shortcut button to search for emojis, GIFs and symbols. ¯_(ツ)_/¯

Again, fairly minor issues in the grand scheme of things with only the battery life being a potential deal-breaker. That doesn’t keep it from being a bargain, though. Also, it appears from HP’s service video for the Pavilion Plus 14 that all but the memory is serviceable because it’s soldered on.

If you want something with better battery life, that also happens to be smaller, lighter and an excellent value, consider HP’s Pavilion Aero 13. There’s no OLED option but it’ll run for more than 10 hours and it only weighs 2 pounds. If your heart is set on getting an OLED, both Asus’ smaller Zenbook S 13 OLED and the 14-inch Acer Swift 3 OLED are worth considering. They both have better battery life but also cost more.

How we test computers

The review process for laptops, desktops, tablets and other computer-like devices consists of two parts: performance testing under controlled conditions in the CNET Labs and extensive hands-on use by our expert reviewers. This includes evaluating a device’s aesthetics, ergonomics and features. A final review verdict is a combination of both those objective and subjective judgments.

The list of benchmarking software we use changes over time as the devices we test evolve. The most important core tests we’re currently running on every compatible computer include: Primate Labs Geekbench 5, Cinebench R23, PCMark 10 and 3DMark Fire Strike Ultra.

A more detailed description of each benchmark and how we use it can be found in our How We Test Computers page.