What is the Nothing Phone 1? Does it rival the iPhone? Should you buy one? I’ve finally been able to get my hands on the phone and found that there are plenty of reasons to like it, from its flashing LED “glyph” to its affordable price. A lack of US availability at launch is disappointing, but otherwise this phone seems like an interesting midrange model for those of you wanting something a bit different from Apple’s, Samsung’s or Google’s devices.

Here, then, is what you need to know about this first phone from the tech startup Nothing, including its price, when you can buy it and, crucially, whether it’s actually any good.

Nothing is a tech brand started in 2020 by entrepreneur Carl Pei. He was one of the founders of OnePlus, a company that offers phones and other devices and has been known for making solid products with good specs at prices that typically undercut its rivals Apple and Samsung.

It was exactly that philosophy that transformed OnePlus from a tiny, niche company to a top tech brand with products that offer serious competition to the best ones out there.

Pei left OnePlus to start his new company, Nothing. While I can’t say I’m much of a fan of the name, Pei’s philosophy of trying to do things a little differently than rivals should make it an interesting brand to keep an eye on.

What’s exciting about the Nothing Phone?

But who cares who’s behind the company if the product itself doesn’t have anything to shout about. Thankfully, the Nothing Phone 1 does have some neat features to look forward to.

Its design is where it really stands out. The back has a clear cover that exposes the internals and makes it feel like you’re looking into the heart of the phone. You can see where different pieces connect, you can see exposed screw heads and the only branding is the subtle Nothing logo and the little red dot, which is the signature of the brand.

But it gets better. Some of those pieces seen beneath the cover are actually LEDs that light up in what Nothing calls a “glyph” when you get incoming notifications. This is arguably something of a novelty, but it’s definitely quite a fun quirk of this phone.

On the back you’ll also find a dual camera setup with a standard and ultra-wide view. The phone is wrapped in a metal band that looks and feels nice, while the 6.55-inch OLED display is vibrant and sharp. The Qualcomm Snapdragon 778G+ processor should be more than capable of handling everyday needs while also giving you access to that superfast 5G network.

It’s an Android phone at its heart, running the latest Android 12 over which Nothing has slapped a neat and clutter-free interface that doesn’t preload any nonsense that could slow things down. Then there are features like in-screen fingerprint scanning, IP58 water resistance, a 120Hz screen refresh rate and fast charging — all of which add up to this phone feeling surprisingly feature-packed for its price.

How much does the Nothing Phone 1 cost?

One of the most exciting things about this phone is its affordable price. It costs £399 in the UK. This puts it firmly in the lower-midrange price bracket, which to be honest came as a surprise when I first heard it. The specs seem really solid. And with such a focus on design, I expected a price of maybe a hundred more pounds. So you are getting a decent-performing phone for a good price. On paper, at least.

When can I buy the Nothing Phone 1?

The phone launched Tuesday in the UK and Europe first. There isn’t currently a firm plan on when it might get a proper US launch. It is likely to happen, though, perhaps once Nothing finds a carrier to partner with to help make its 5G bands compatible.

We will bring you US availability updates as soon as they happen.

Is the phone the first Nothing product?

The Phone 1 is probably the most high-profile and most exciting product Nothing has launched, but its first product was a set of earbuds it launched last year called the Nothing Ear 1 buds. You can certainly tell they’re from the same team. There’s a definite aesthetic shared between the products, with the same transparent elements that show the inner workings.

Like the phone, the buds were launched with a more reasonable price but still offered pretty decent performance overall that made them well worth considering if you didn’t fancy splashing out for Apple’s earbuds. If you have the Nothing Buds and love the unusual look then you’ll almost certainly appreciate the phone.

Should I buy the Nothing Phone 1?

There’s always going to be a lot of fanfare and PR spin and marketing nonsense around a new company. And certainly some of Nothing’s rhetoric around “more soul,” “brave simplicity” and a “new way to communicate” is arguably a little pretentious. But putting all of the company nonsense aside, the actual product itself seems pretty good.

It’s got a solid set of specs and a stripped-back interface. While its design might not be to everyone’s tastes, it certainly stands out from the crowd. Personally, I think it’s quite cool.

But it’s that affordable price that I think makes the phone so appealing. The Phone 1 isn’t trying to compete with the iPhone 13 Pro or the Galaxy S22 Ultra. Instead, it aims to give a decent overall experience for a price that’s much more approachable to those of us tightening our purse strings.

We’re testing the phone right now for the full review, putting its processor, camera and other features through their paces to see just how well it performs against the competition and whether it’s really worth your money. 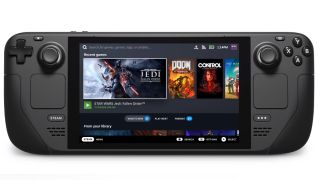 Steam Deck: everything we know about Valve’s handheld PC Goodbye smudges. For Gorilla Glass phones, matte could be the new black