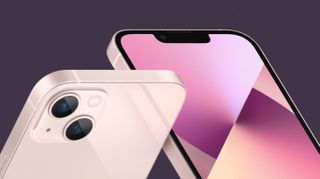 The iPhone 13 series are now official, having been unveiled at the September 14 Apple event. We’ve got everything you need to know about the new handsets, including the all-important pricing and release date info.

Highlights include a powerful new A15 Bionic chipset, some impressive-sounding camera upgrades, and improvements to the battery life and screen. Read on to learn everything we know so far about the next generation of iPhones.

iPhone 13: cut to the chase

September 24 is the iPhone 13 series release date, and unlike 2020’s iPhone 12 series you’ll be able to buy each of these handsets on the same day.

In the UK they’re actually slightly cheaper than the launch prices of the iPhone 12 and iPhone 12 mini.

Ready to pre-order the iPhone 13? You’ll find the best deals for your region below.

The iPhone 13 features a flat-edge design, and has the Ceramic Shield glass we saw on the iPhone 12 series. It’s also IP68 dust and water resistant (to a depth of six meters for up to 30 minutes).

There are five new colors, which are Pink, Blue, Midnight, Starlight and Product Red.

The design is largely similar to the iPhone 12 series, so if you own one of those phones you’ll likely know what you’re getting here. The notch is slightly smaller – Apple says it’s 20% smaller – so there’s a bit more space on the screen.

The iPhone 13 and 13 mini are slightly thicker than last year’s models though, at 7.65mm compared to 7.4mm for their predecessors.

Each phone still features a 60Hz screen refresh rate, which matches with the rumors.

MagSafe also makes a return on all the iPhone 13 handsets, so you’ll be able to use any accessories you bought last year for your iPhone 12, while Apple has introduced some new accessories as well.

The iPhone 13’s camera block has a new design, with the lenses arranged diagonally for the first time, rather than vertically.

Performance in the dark should also be improved, with Apple claiming the main snapper can capture 47% more light than its predecessor, and that the ultra-wide can reveal more detail in dark areas.

All of the iPhone 13 models also include a new Photographic Styles camera feature that lets you selectively apply adjustments to add a custom look to your photos, and a Cinematic mode for videos, which lets you create depth effects and focus transitions.

The phones also all include a 12MP f/2.2 selfie camera on the front, like their predecessors.

The iPhone 13 series all come with Apple’s A15 Bionic chipset inside, which Apple claims has an up-to 50% faster CPU and 30% faster GPU than the competition.

It also includes a new 16-core Neural Engine that’s capable of 15.8 trillion operations every second. All of these handsets are also 5G-compatible, as were the iPhone 12 series.

You’ll have the option of 128GB, 256GB or 512GB of storage in the iPhone 13 duo – Apple has finally got rid of its 64GB option for its flagship iPhones, and that means more storage in the cheapest variant.

In terms of specific life, the iPhone 13 mini can apparently manage up to 17 hours of video playback, while the iPhone 13 is said to be capable of 19 hours.

This has mostly been achieved by a variety of optimizations through the A15 chipset and iOS 15 software. Apple has yet to confirm the size of the battery in the iPhone 13 models, and it’s unlikely we’ll know that until someone opens up a handset and finds out manually.

As on the iPhone 12 series, you won’t get a charger in the box with any iPhone 13 model. You’ll need to use your existing charger, buy one separately, or use wireless charging.

That wireless charging is up to 15W, which will give you a respectable speed but won’t match what some Android phones are capable of.

What day does the iPhone 13 come out?