iPhone 14 Emergency SOS: Here's How I Used a Satellite to Contact 911 Apple's iPhone 14 models now have the ability to use the new feature in crisis situations. 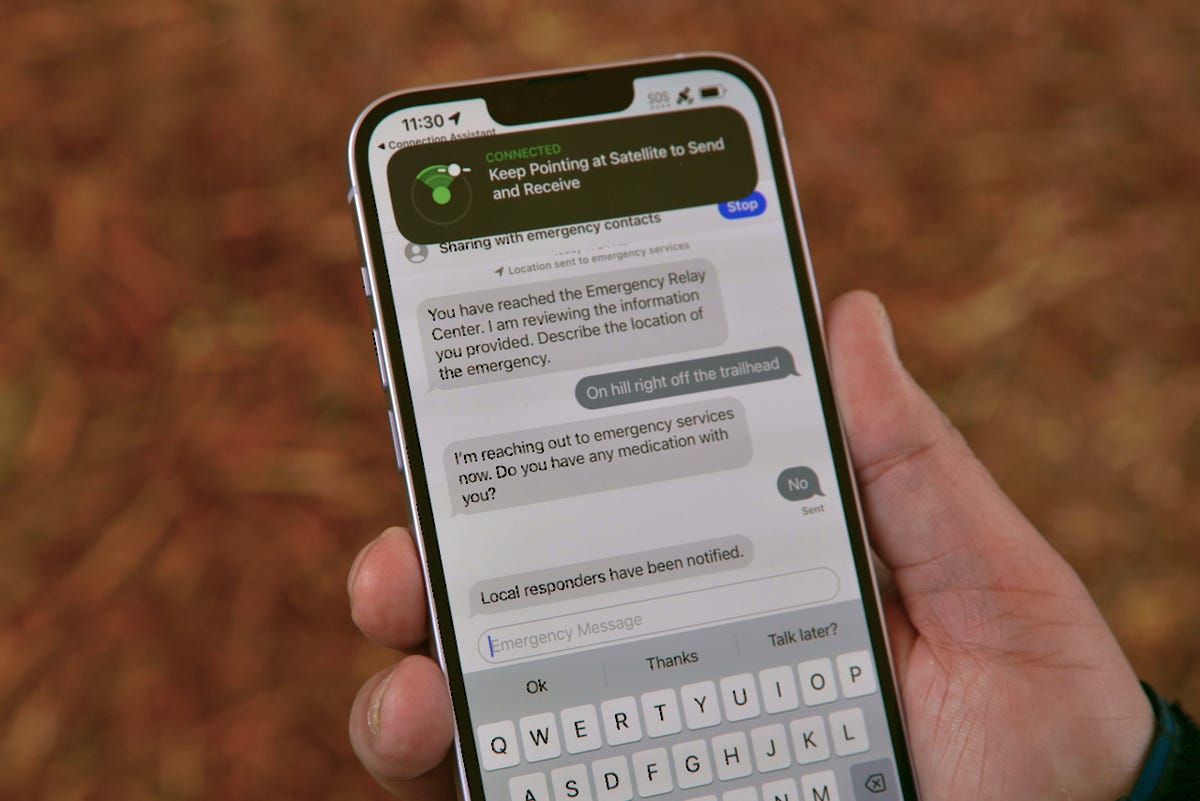 Some of the most significant upgrades in the iPhone 14 are inconspicuous tools and services that, ideally, you’ll never need. Emergency SOS via Satellite, which Apple announced in September but just launched on Tuesday, is one such feature — and I had the chance to try it out.

Beyond the clouds and sky, hundreds of miles above the Earth flying by at 16,000 miles per hour, are communications satellites. They’re too high to be seen by the human eye, but could be vital for getting you help when you (or someone you love) is stranded, injured and out of cell service range. The iPhone 14 can connect to these satellites to contact an emergency dispatcher even when you can’t make a phone call. You can also share your location with loved ones via a satellite without sending a message.

Like Car Crash Detection, Emergency SOS via Satellite is something you hope you won’t ever have to make use of. But if you’re wondering how it works, I had the chance to test it out at Apple Park. If you want to try the service out for yourself, Apple added in a built-in demo mode that lets you connect to a satellite without calling 911.

How to use Emergency SOS via Satellite on the iPhone 14

The first thing you need to know about Emergency SOS via Satellite is that you don’t need to know anything. The service is designed to work on its own, and the interface will walk you through the process step by step.

The second thing you should know is that using Emergency SOS is equivalent to calling 911. In fact, that’s actually how you use it. Dial 911, and if your phone can’t connect, an option to text emergency services via satellite appears. To get started, tap the Emergency Text via Satellite button. (You can also go to Messages to text 911 or SOS, and then tap Emergency Services.)

When I tried the feature out, there was a satellite icon on the top right corner of the phone, where my cell signal normally is.

Next, tap Report Emergency. Since a back and forth conversation isn’t possible over a satellite connection like a regular phone, Apple worked with emergency dispatchers to create a form that gathers the essential information they need in order to respond. Those details are compressed into a message that’s a third the size of a regular text so that it can be sent to a satellite in low Earth orbit.

Using taps, you answer the emergency questions based on your situation. The types of emergencies you can choose are:

Next, onscreen directions will help you connect to a satellite. The interface is simple and guides you through finding a satellite and staying connected. As the satellite moved, I was prompted to shift left or right to maintain the connection. And despite a cloudy, rainy day, the connectivity worked within 20 to 30 seconds. But it could take a minute or more to connect, especially if there is light foliage.

Once you’re connected, your iPhone starts a text conversation with emergency responders and shares the emergency questionnaire answers, your location (including elevation), critical information like your medical ID and emergency contact information (if you have set them up) and the remaining battery life for your iPhone.

You might be asked questions through additional messages, like where you’re located or whether you have medication.

At the top of the screen, a window shows your connection to the satellite and the status of your messages. Emergency dispatchers receive your messages and respond via text. If your local emergency services don’t support text messages, Apple has set up relay centers with operators who work as an intermediary between you and emergency dispatch.

The service will be available now on:

Can I try out Emergency SOS via Satellite?

Yes, kind of. Apple created a demo mode that lets your iPhone connect to a satellite without calling or contacting 911. The experience is nearly identical to what I did, except you are not contacting emergency services.

To start the demo, go outside and open Settings. Then, tap Emergency SOS and scroll to the bottom to try the demo.

The Emergency SOS via Satellite demo turns off your cellular connection and gives you a preview of the emergency questionnaire. But again, it’s not actually contacting emergency services.

Next, the demo walks you through finding a satellite. It’s a good way to familiarize yourself with the feature should you ever need it. (Plus, connecting your iPhone to a satellite is just cool.)

How do I share my location using a satellite?

Another way to use satellite connectivity on your iPhone is sharing your location to let friends and family know where you are without messaging them.

In the Find My app, tap the Me tab. When you expand the tab, you’ll see a new section called My Location via Satellite. Tap Send My Location. You’ll be prompted to find and connect to a satellite. In the time I spent trying Emergency SOS via satellite at Apple Park, this particular step took minutes to send my location.

Where can I use Emergency SOS via Satellite?

Currently it’s available in the US (including Puerto Rico and the US Virgin Islands) and Canada. The service will expand to France, Germany, Ireland and the UK next month. But you don’t need to live in these places to use this feature. Emergency SOS service is also available for people visiting the US and Canada, unless they bought their iPhone 14 in China, Hong Kong or Macao.

Can I use Emergency SOS via Satellite indoors?

No. You need to be outside and have a direct line of sight between your iPhone and the satellite. The service doesn’t work indoors, and tall buildings, mountains, dense foliage and other objects can block satellite connectivity. The Emergency SOS interface guides you to help you find and connect to a satellite.

How much does Emergency SOS via Satellite cost?

The service is free for two years. Beyond that, Apple hasn’t shared how much it will cost or if there will actually ever be a charge to access the feature.

Does the iPhone 14 have satellite connectivity?

What satellites are used for Emergency SOS via Satellite?

Apple worked in partnership with satellite telecommunications company Globalstar, which is headquartered in Covington, Louisiana, with facilities across the US. The feature uses Globalstar’s network of low-orbit satellites.

Apple made a $450 million investment to provide critical enhancements to Globalstar’s satellite network and ground stations. At Globalstar, more than 300 employees support the new service.

Can an iPhone be used as a satellite phone?

Yes and no. The iPhone 14 series can connect to satellites to send a text message to emergency services when a call can’t be placed. You can also share your location via satellite in the Find My app. However, you can’t use any iPhone to make calls like a dedicated satellite phone.

Can the iPhone 13 be used as a satellite phone?

No, only the iPhone 14 series supports satellite connectivity for emergencies.

Which iPhone is a satellite phone?

None are technically satellite phones, but the iPhone 14 series does support contacting emergency services via satellites through text messages as a last resort.

For more, here’s your complete guide to the iPhone 14 and everything to know about iOS 16.