Last year, I bought a new Apple TV remote. You know, the thicker one with the extra buttons. I bought it because I kept losing the old super-thin Apple TV remote that was always disappearing into another dimension through the sofa cushions.

I’d show you a picture of the new remote, but I lost it.

I don’t know how it was lost. My kid says he left it on the sofa somewhere. We don’t see it. The point is, it’s gone. Our Apple TV remotes still disappear. And the one thing I can’t do is summon it by having my iPhone ping for me.

Apple, in particular, has never made a remote that’s not easy to lose. The thinner black version, the one I am now reverting back to because the silver one’s lost, was always too slim and sleek for its own good. It was made for magical vanishing acts. It can slide into cushion gaps, tuck under books. It’s a natural chameleon. It slides, friction-free, into cracks in whatever you’re sitting on.

The thicker remote Apple made last year is less cushion-slidey, but it still ended up under pillows, buried between things, misplaced near the Xbox controllers. I’ve learned to track its location like a concerned parent. You never know when it will run off. I liked Apple’s larger remote and its more tactile buttons, but it wasn’t large enough, I guess.

There are other ways to control an Apple TV if your remote is lost — you can use your iPhone or Apple Watch as a remote in a pinch, and the built-in apps work fairly well. But Apple’s missing move is to make that damn remote findable, pingable. That would mean adding a tiny speaker, and maybe a U1 chip if it were enabled with the type of specific location-tracking that AirTags have. I don’t really care what the solution is, but I would like my remote back. Having a Find My option would ease my cluttered mind.

There are Apple TV remote covers that are large and neon-colored. And ones that can allow you to attach an AirTag, effectively making it the thing I’ve been looking for. But that won’t retrieve my missing remote right now, will it?

Look, losing things is my problem. I’m surrounded by mess, and I misplace items all the time. My fantasy is somehow having magical sensory abilities to track all stuff, always, locating physical objects as easily as I mindlessly Google up everything else.

Until my brain develops a direct neural link with all physical objects, the next best thing is just either making that remote larger or making it trackable. I’d prefer the latter at this point.

Maybe Apple has a new Apple TV in the works for this fall. Maybe it doesn’t. I don’t really care about the box itself. I just want a better remote that I won’t lose. 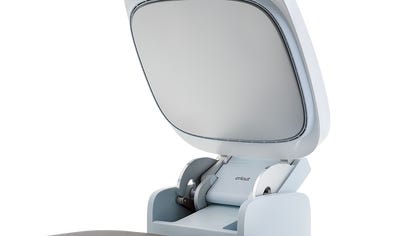 Cricut Autopress Review: A Clever Heat Press in an Expensive Box Cricut has made it easier than ever to create a home assembly line, but you pay in more ways than one to get it.