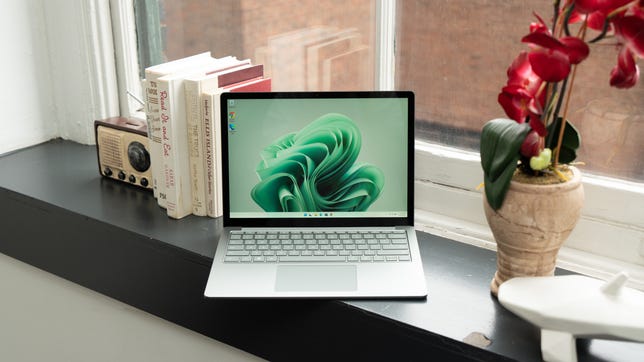 The Surface Laptop line reminds me so much of an older generation of MacBooks… and not in a good way. Microsoft has stuck with the same essential design for years, doing the least to keep it current. The Surface Laptop 5 is a fine notebook, just as it’s always been, but it’s not as up-to-date or high performing as a lot of similarly priced (or cheaper) models — the Dell Inspiron 14 2-in-1, Lenovo Yoga 7i, HP Spectre x360 or even the MacBook Air if you swing that way. At least, it wasn’t for the $1,700 top-end model we reviewed.

Age always shows in the screen bezels, which dates the design. Both the Surface Laptop 5 and the Surface Studio 2 Plus seem to have been updated with enterprise buyers in mind, where product buying gets approved for specific configurations and a change that may increase the price means another round of approvals, but IT departments want the laptops it distributes to be as homogeneous as possible for easier accessorizing, support and deployment. Both of those make switching to another manufacturer a higher barrier than for a typical consumer. (It’s also why you’ll sometimes see updates to products that have you thinking “Why did they bother?”)

Available in 13.5- and 15-inch sizes, the major difference from the Surface Laptop 4 is the move to Intel’s 12th-gen Core processors, specifically a choice of an i5-1235U or i7-1255U for consumers and i5-1245U or i7-1265U for business buyers (the latter chips come with support for Intel’s vPro security). With the processor change also comes faster DDR5 memory: 8GB, 16GB or 32GB (15-inch only). You have a choice of 256GB, 512GB or 1TB removable solid-state drive for storage, though it’s only intended to be removed by a technician (not the rest of us).

Actually, it comes in about four configurations for each size, not all of which are available in all four colors. In other words, if you want the $999 base configuration of the 13-inch with an i5, 8GB RAM and 256GB SSD but with 16GB memory instead, you can’t get it — you have to pay more for the 512GB version. You’d have to pay a technician to install the new SSD.

There’s just a single USB-C port, a USB-A 3.1 port, a combo headset jack and a Surface Connect port. One positive, though, is the USB-C port is now USB 4.0/Thunderbolt 4, and it still supports power input so you’re not forced to use the proprietary Surface port.

But Microsoft missed the memo on improving built-in webcams and stuck with its old 720p version the Surface Laptop 5; other PC-makers have bumped up to 1080p full HD for generally sharper, more detailed video conferences. The company says that Windows 11 improves the quality of the existing camera, but it’s still not great in anything less than well-balanced lighting. And unlike other companies who’ve said that the tiny display bezels hamper its ability to swap out the webcam for a better one, there’s plenty of room in the Surface Laptop’s fat bezels for an upgrade.

Microsoft added Dolby Vision IQ support, but in the case of the Surface Laptop’s same-as-ever screen that just means it can display Dolby Vision-encoded content a little better than it otherwise might. I think of it as it-can-just-do-the-math HDR. The screen that was so notable a few years ago hasn’t kept up with OLED or P3-gamut, high-brightness screens, though it does have a slightly higher contrast than a typical IPS panel.

The biggest upgrade were some new components, but they perform in the same range as other laptops with them, and frequently at the bottom of that range. I suspect Microsoft’s settings are very conservative to help keep cooling and battery life within reason in the older chassis design. And running on battery can result in about a 30% performance hit, something to keep in mind if you work that way a lot.

The Surface Laptop 5 remains afloat as a solid machine. It’s just not one that stands out in any particular way. Just like the last one.