Samsung Galaxy Watch 5 Ongoing Review: Lots to Like, Unless You Want A Bezel The best Android watch so far gets a facelift, but what else is new? 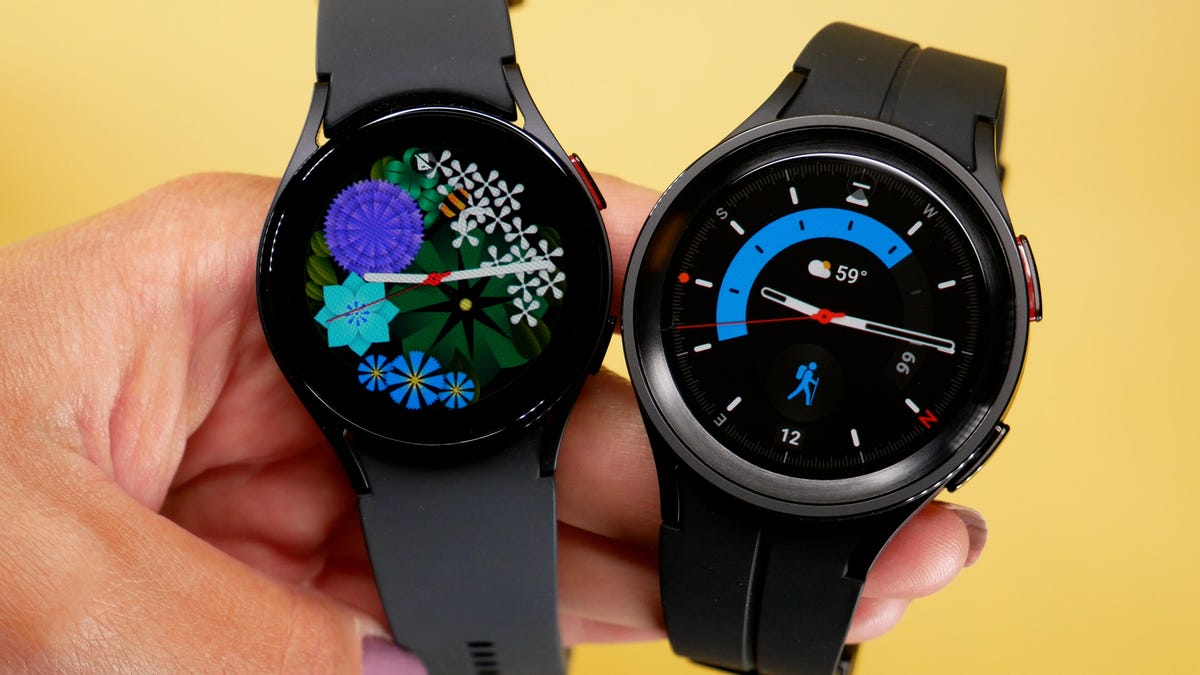 The Galaxy Watch 5 and Watch 5 Pro are Samsung’s latest wearables that want to be your go-to Android watch. Released Aug. 26, along with the Galaxy Fold 4 and Flip 4, they have bigger batteries, a new temperature sensor and a more durable design. But they lose the fan-favorite rotating bezel that the Galaxy Watch 4 Classic model still offers as an alternative to using a touch-sensitive rim.

This year’s watch comes in two variants: The Galaxy Watch 5 and a slightly larger, more rugged Galaxy Watch 5 Pro. Apart from the construction, sports modes and battery capacity, they share most of the same features. So far, I haven’t found that many significant differences warrant an upgrade from last year’s Galaxy Watch 4 series given the software is largely unchanged and the new temperature sensor is not yet active.

But the Galaxy Watch 5 Pro is the more tempting proposition if you want a more durable watch with a bigger battery. With the Pixel Watch on the horizon and a new wave of Wear OS watches like the Montblanc Summit 3, the Galaxy Watch 5 faces some new competition that just wasn’t there in 2021. Also keep in mind many of Samsung’s key watch health features require a Samsung phone to use. This is an ongoing review and I’ll update with full findings once I’ve had at least a week wearing both watches.

Better fit on the wrist, but bye-bye rotating bezel

Though the Galaxy Watch 5 doesn’t look all that different to last year’s regular Watch 4, the back now sits more snugly against your wrist, which makes for a more comfortable design and, hopefully, better sensor accuracy. (I’m still testing the sensor accuracy.) It comes in 40mm and 44mm sizes, similar to last year.

By now you’ve likely seen that the biggest physical change is the absence of a physical rotating bezel, a stalwart of the Galaxy Watch line ever since the original model came out in 2018. Instead, these watches both use a software-based touch bezel where you move your finger around the edge of the display to navigate, on top of the touchscreen itself and two physical buttons on the side. Last year’s Galaxy Watch 4 model worked the same way, but the Watch 4 Classic had that physical bezel option, which has now gone bye-bye on the new models.

The Watch 5 Pro has a more durable design with a raised edge, titanium construction and stronger sapphire crystal glass. It only comes in one size, 45mm, which makes it more difficult for those with smaller wrists to wear. I’ve definitely worn larger watches before — the Garmin Epix 2 comes to mind, with its hefty 47mm frame — but for people with even smaller wrists than mine, it will probably be too big.

In practice, the touch bezel is easier to use on the Watch 5 Pro because of its raised edge. You can almost rest your finger against it as you “turn” the bezel. It’s still not as precise as having a physical bezel that clicks into place, especially if you have wet or sweaty hands. That seems inevitable if you’re really using this watch for its sports capabilities. I can see why Samsung opted to remove it given it’s another moving part that could potentially get damaged or jammed if you’re using it in tough environments. But I still miss having that option.

Both the watches use the same processor as last year’s watches, rather than the new Qualcomm Snapdragon W5 chip. But like CNET’s Scott Stein wrote last year in his review of the Galaxy Watch 4, performance was never really an issue with these watches anyway. The Watch 5 series is responsive and loads apps quickly.

Design-wise, there’s really very little to tell the new watches apart from the Watch 4 series. They both run Samsung’s One UI on top of Wear OS 3, with Google apps like YouTube Music, Google Maps and the Google Assistant onboard.

But even though there’s a suite of Google and third-party apps through the Play Store, the Galaxy Watch 5 series needs a Galaxy phone to use certain health sensors like the ECG. It’s an Android watch, but still feels most closely aligned with Samsung devices.

Other things I’ve noticed on the software side: The full keyboard is easy to swipe messages on, even on the smaller 40mm model. Phone calls I’ve taken on the watch sound clean and crisp, with the microphone picking up my voice well for callers on the other end.

Both watches can track more than 90 exercise types and can automatically detect certain workouts like running, swimming and elliptical. But the Galaxy Watch 5 Pro has a few more sports features. Do they warrant calling this watch “Pro”? Maybe.

The first is track back. This works with hikes and outdoor cycling workouts and helps route you back to your start point on the same path. Just swipe over to the settings cog, find track back and the watch will show a map on screen with your current location and turn-by-turn guidance and distances. The path you traveled in on is shown in blue and as you start navigating back, it’s overlayed in green.

You can also import routes to the watch and get turn-by-turn navigation. It only works with hikes and bike rides at the moment, but it’s really easy to import a GPX file. I exported a previous ride from Strava and uploaded it to the Watch 5 Pro in seconds. Like track back, the map (which uses Google Maps) looks great on the screen and it’s really easy to see.

The Galaxy Watch 4 classic in the smaller 40mm size would sometimes barely get through a whole day before needing a recharge. So far, the regular Galaxy Watch 5 lasts longer, but not by a huge jump.

I’m finding I usually need to give the watch a little bit of a top-up before bed if I want to track sleep. If you find yourself in the same boat, I’d recommend having at least 30% battery remaining, especially if you’re tracking blood oxygen, snoring levels and heart rate overnight. The claim is up to 40 hours, but I don’t think I could meet that unless I had the watch in airplane mode most of the time, which means I wouldn’t get notifications or calls.

The 44mm version that I haven’t tested yet comes with a larger capacity battery at 410 mAh, so I’d expect it to last longer. Samsung quotes 50 hours.

The Galaxy Watch 5 Pro has the biggest battery of all at 590mAh and Samsung claims it can last 80 hours in total, or 20 hours with GPS. I did a 2 hour hike with airplane mode active to ensure I was using GPS-only, and the battery dropped just 10% even with the always-on display active. That’s promising when it comes to meeting Samsung’s GPS claim. I have more testing to do in the coming days with the Galaxy Watch 5 Pro, so stay tuned for battery findings.

Fortunately, both the regular Watch 5 and Watch 5 Pro support faster charging and can reach 45% charge in 30 minutes. I tested this with the Watch 5 Pro and recharged from flat to 42% full in half an hour. You do need a 25-watt USB-C charger to take advantage of this faster charge speed and, just like the Apple Watch, there’s no charging brick included in the box.

Skin temperature tracking has promise, but isn’t active yet

The infrared sensor is what sets the Watch 5 series apart from last year’s models. But it’s not active yet and we don’t have an ETA on when it will get switched on via software update. Samsung says it will be used nightly while sleeping. Competitors like Fitbit and Oura use the infrared sensors on their devices for skin temperature tracking during sleep. It gives more insights into whether or not you may be running a fever, or to give insight into menstrual cycles.

Most of the other health features and sensors remain largely unchanged from the Galaxy Watch 4. You still get that bioimpedance sensor to measure body composition, plus a blood oxygen sensor and ECG. I’ll be comparing the heart rate sensor to a chest strap in the coming days to see how it performs during workouts. Given the back of each watch has been redesigned to sit more snugly against the wrist, I’m expecting better accuracy from both watches compared to last year’s models.

I still have plenty more testing to do, including heart rate sensor accuracy, using the sleep coach, plus more of a deep-dive into the sports features on the Galaxy Watch 5 Pro. Stay tuned for the full review.