Samsung QN90B QLED vs. LG C2 OLED: Which TV is best for you? Short answer: Get the OLED. Longer answer: It depends on room lighting, size preferences, gaming and budget. 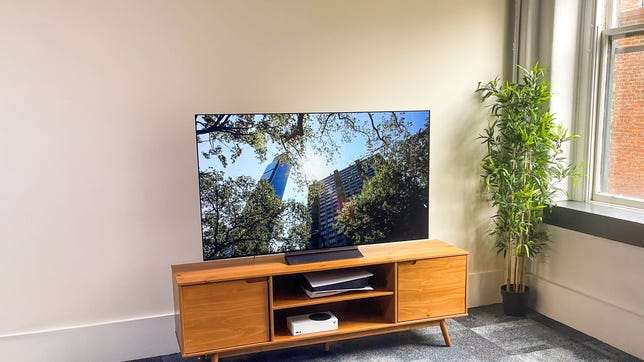 For high-end shoppers, two of the best TVs you can buy in summer 2022 are the LG C2 OLED TV and the Samsung QN90B QLED TV. Both deliver excellent image quality, have all the cutting-edge features you need and at most sizes they’re in the same price ballpark. So which one should you get?

The answer comes down in part to their two fundamentally different display technologies, namely QLED vs. OLED. OLED wins in general and I did like the LG C2 better overall, but it’s not for everyone. The brightness of your room, the size you need and how much you’re willing to spend all play a role, too, along with how you like to play your games. Allow me to explain.

The C2 is a superb example of OLED, with the best picture quality I’ve ever tested. On the other hand it’s not a major upgrade over the 2021 C1, which remains our favorite high-end TV for the money. Real improvements include carbon-fiber construction for up to 47% lighter weight — the 65-inch version we reviewed weighs just 37 pounds with its stand, compared to 72 pounds for the 65-inch C1 — as well as some additional tweaks to game mode, a new “always ready” feature and a 42-inch size.

The Samsung QN90B proves you don’t need OLED technology to give a top-notch picture. This TV’s QLED panel is augmented by mini-LED for a brighter image than any OLED TV. The spectacular contrast of OLED still won out in our side-by-side tests, but the QN90B QLED screen comes closer than ever. Improvements over the 2021 QN90A include a brighter image with less blooming and a new cloud gaming hub.

Picture quality: LG OLED gets the nod in most rooms

Both delivered an excellent image in our tests, but the LG pulls ahead thanks to the inherent advantages of OLED technology. It can get completely black, which creates superior contrast in mixed bright-and-dark scenes, where even a QLED TV as good as the QN90B looked a little flatter in my comparisons (note that in my QN90B review I compared it to the LG C1, not the C2, but the results were basically the same).

If you have an extremely bright room, however, where you can’t control ambient light or have lots of windows facing the screen, the Samsung QN90B wins. That’s because it can get much brighter — twice as bright or more depending on what you’re watching — which helps it better compete with bright lighting. Its screen is also better at reducing reflections. The LG C2 is plenty bright itself, however, so it’s still our image quality pick for most rooms.

As usual the OLED is better for off-angle viewing, namely seats to either side of the sweet spot. And the C2 also showed superior color accuracy in our tests, although the difference isn’t major.

Both series come in a wide variety of roughly equivalent sizes and prices, but the QN90B is less expensive in the largest sizes, especially 85-inch. Here’s how the current prices break down.

Features and design: Pretty much a wash

In short, neither TV has a big edge in looks or extra features.

The biggest difference is Samsung’s more capable gaming hub, which connects to cloud gaming services including Xbox Game Pass, Google Stadia, Nvidia GeForce Now and Amazon Luna so you can play games directly on the TV, without a console. The LG C2 has cloud gaming for Stadia and GeForce Now, but not Xbox or Luna. In the end, however, I don’t consider cloud gaming a huge deal since I expect owners of high-end TVs like this to lean toward connecting an actual console, like a PlayStation 5 or Xbox Series X, instead.

Gaming features are basically equivalent between the two. I preferred the look of the C2’s various gaming modes better, especially for color accuracy, but again the difference wasn’t huge. Both have support for the latest features like 4K/120Hz signals, ALLM (with similar input lag numbers) and VRR formats. And speaking of formats, the Samsung’s lack of Dolby Vision HDR, and inclusion of HDR10+, are minor differences in my book as well.

I like Samsung’s remote better but LG’s super-thin panel design is more impressive, for what that’s worth. And both included smart TV systems are worse than Roku or Google TV.

Here’s where I remind you that, like all OLED TVs, the C2 is more subject to both temporary and permanent image retention, aka burn-in, than LCD-based TVs like the QN90B. The risk is small, which is why I don’t consider burn-in a reason for most people to avoid buying an OLED TV. Check out our guide to OLED burn-in for more.

Budget high-end hack: Get a 2021 model instead

Both the LG C2 and the Samsung QN90B are 2022 TVs, but their predecessors from 2021 we mentioned above, the C1 and the QN90A, are both still available for hundreds less. If you want the best value for your high-end TV dollar, it’s worth looking at those before they sell out later this year.