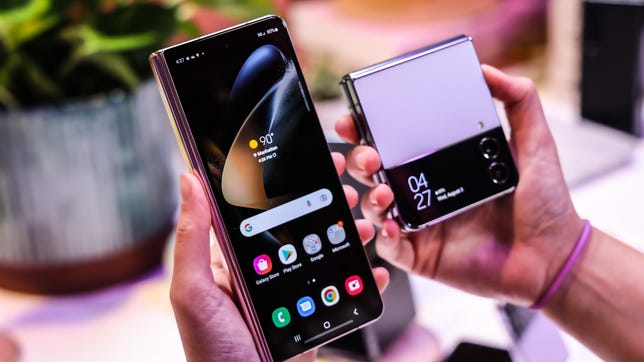 In addition to showing if foldables are “there” yet for you in their fourth generation, both the Z Fold 4 and Z Flip 4 features may foreshadow features that we’ll see in potential competing models from companies like Motorola and Google.

As we’ve come to expect from Samsung’s semiannual Unpacked announcement events, for its August 2022 launches the company delivered news about its latest phones, watches and earbuds: the Galaxy Z Fold 4 and Z Flip 4, Galaxy Watch 5 and Watch 5 Pro and Galaxy Buds 2 Pro. The Galaxy Z Flip 3 will get one of our favorite last-gen perks, a $100 price cut.

Among its new product announcements, Samsung brought us up to speed on its sustainability initiatives, including incorporating recycled fishing nets in its latest foldables. Plus we got to see a new promo featuring Korea’s other major global star: BTS.

All the products are expected to ship on Aug. 26.

Want a play-by-play, detailed summary? Check out our archived live blog of the event.

Like the Z Fold 4, the Flip 4 gets the bottom-screen trackpad feature in its Flex Mode and the nighttime photography improvements that were launched with the S22, including night portrait-mode photos. You’ll also be able to send quick replies to texts, make calls and shoot portrait-mode photos from the cover screen.

You’ll also be able to get a Bespoke Edition like the Flip 3.

The Galaxy Z Fold 4 has a wider cover screen that makes apps look more like they’re intended and that’s designed to make look like a typical phone when it’s closed. A new Flex Mode feature, also coming to the Flip 4 lets you use the bottom half of the screen as a trackpad.

Samsung claims it’s more durable than its predecessor, notably the internal tablet-sized display. We were treated to a discourse on the upgraded hinge, the new screen-layer architecture and shock-absorbing sponge. The company also Samsung also says the inner screen is brighter, and will have a less noticeable under-screen camera. It inherits the nighttime photography improvements launched with the S22 line, including night portrait-mode photos.

Samsung says this is the first device with Android 12L, the version of Android optimized for tablets. 12L brings a new task bar for streamlining app switching.

In addition to the existing Watch sizes, there’s a new, larger and heavier Pro model with a more durable titanium build. Samsung says both Watches have longer battery life over earlier models thanks to higher-capacity batteries (590 mAh in the Pro), an infrared skin temperature sensor and a more durable sapphire crystal for the watch face instead of Gorilla Glass. Plus, there will be new faces available.

There’s a larger surface area for sensor contact on your wrist, which Samsung says will provide more accurate results, and a smaller combined sensor size.

Samsung’s offering some trade-in discounts on preorders: $75 off the Watch 5, or $125 off the Pro if an “eligible” watch is traded in, along with a $50 credit for accessories.

The Galaxy Buds 2 Pro have beefed up surround and hi-fi audio — as long as they’re connected to a Galaxy phone running Samsung’s One UI 4.0 or later. Samsung’s also eked out another two hours from its battery.

Later in the year, Samsung will be updating the Buds 2 Pro with better 360 LE audio.