Smartphone Shipments Keep Declining As Inflation Chokes Demand Worldwide Experts expect things to get worse by the end of the year before recovering in 2023. 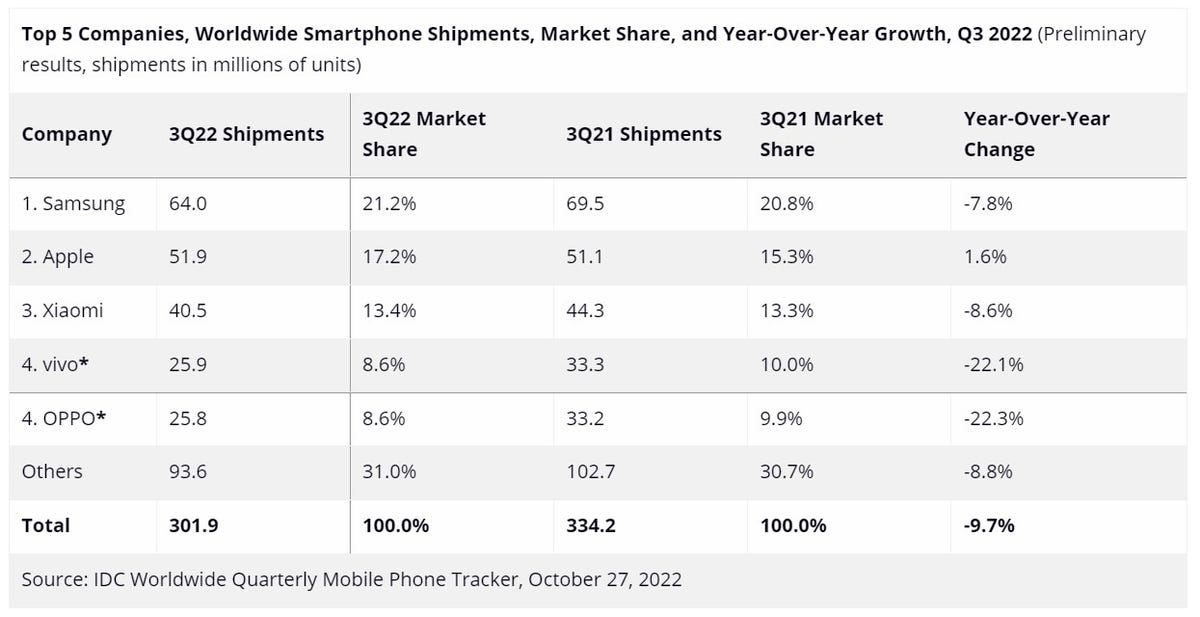 The amount of smartphones shipped by manufacturers has declined for the fifth straight quarter, and it’s going to get worse through the end of 2022, experts have warned.

Around the world, smartphone shipments dropped down to just under 302 million units in the third quarter of 2022, a decline of 9.7% compared to the same period last year. Some of the reduction was intentional as manufacturers try to reduce inventory, but most of the decline was felt in emerging markets where inflation and rising costs led to lower demand, according to a new International Data Corporation (IDC) report.

Among smartphone manufacturers, Apple was the only one to ship more phones in the quarter than it did last year, as expected with its positive quarterly earnings. But inflation-wracked economies blunted Apple’s growth in several markets including China. Other phonemakers like Samsung and Xiaomi fared worse, though Chinese manufacturers Vivo and Oppo were the most impacted. And things are expected to get worse before they get better.

“We now expect a steeper shipment decline for 2022 and a softer recovery in 2023,” said IDC research director Nabila Popal in a press release. While the analyst firm still believes recovery is coming, it “will be pushed further into the year.”

The declining shipments hasn’t shaken up the rankings for which brand ships the most phones. Samsung still holds the top spot with 64 million phones shipped, an over 5 million unit drop from the same quarter last year. Apple holds second place and Xiaomi third, with Vivo and Oppo tied for fourth.

Counterpoint Research largely concurred with IDC in a similar quarterly report, though it put the decline at 12% lower shipments compared to the third quarter of last year. In its latest report, Counterpoint credited worldwide customer unease due to geopolitical issues, weakened national currencies and fears of a looming recession as the reasons for the decline in shipments.

The firm also credited more durable phones and slower technological advancements as reasons for customers to hold on to their phones longer, which contributed to the decline. “This is accompanying, and to a smaller degree advancing, a fall in the shipments of mid- and lower-end smartphones, even as the premium segment weathers the economic storm better,” senior analyst at Counterpoint Research Harmeet Singh Walia said in a press release.

It makes sense, then, that Apple has come out as the only phonemaker to weather the decline with positive growth after the launch of the iPhone 14 series earlier in October.