“The global smartphone market grew for the first time since the third quarter of 2017,” said Strategy Analytics’s Linda Sui in a release, adding that demand for smartphones is recovering due to pricing competition and “new innovations such as larger screens and 5G connectivity.”

During the three-month stretch from July through September, Samsung maintained its position as the world’s biggest phone vendor, according to Strategy Analytics, shipping 72.3 million smartphones to capture 21% of the global market. Apple came in third with 45.6 million iPhone shipments for a 12% of the market.

But it was Huawei, which held on to second place, that apparently made surprising gains. The controversial Chinese tech giant shipped 66.7 million smartphones in the quarter, taking a record 18% of the market.

“Huawei surged at home in China during the quarter, as the firm sought to offset regulatory uncertainty in other major regions such as North America and Western Europe,” said Neil Mawston, executive director at Strategy Analytics.

Huawei’s phones are virtually invisible in the US despite the company’s massive presence around the world. Over the course of 2019, there’s been an upswing in scrutiny of the Chinese telecom giant, with the US and other countries banning the use of its networking equipment. National security officials fear that equipment from Huawei could be used to spy on other countries and companies. 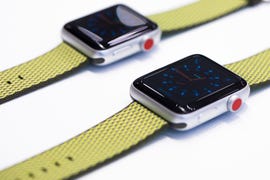