Sonos Beam (Gen 2) vs Sonos Arc: how does the new sound bar compare? 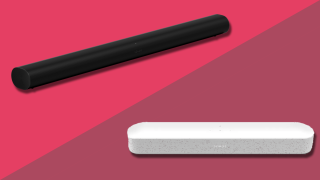 Sonos has announced a new version of its pint-sized soundbar the Sonos Beam (Gen 2) This more budget-friendly option promises a few upgrades over the original, but how does it compare to Sonos’ top-of-the-line soundbar the Sonos Arc?

We’re here to break down the most important factors so you know how the speakers stack up against each other. If you’re in the mood for a new soundbar this is a must-read guide to help you weigh up the soundbars from one of the best speaker makers out there.

Before we dive in we should mention that the new Sonos Beam isn’t out yet (it will be released in October), so we’re basing our assessment on its specs and the performance of similar speakers. Once we’ve had a chance to test the soundbar for ourselves we’ll be sure to let you know if it performs better or worse than we expected.

We’ve speculated that the price increase on Sonos’ devices could be down to chip shortages that have plagued the tech industry from smartphones to game consoles to computers and now speakers.

Either Sonos is passing the increased cost of components onto consumers or – with more people enjoying their home entertainment than ever and driving sales – the forces of supply and demand are at work and Sonos has raised prices to account for less availability.

We’ve not seen Sonos speakers be as difficult to snag as the PS5 or the best PC graphics cards for now, but stock shortages could possibly be on the way. Until stock shortages do arrive (if they ever do), the availability of both devices should be good, but if you’re desperate for a new soundbar now, the Sonos Arc will serve you well as it has already been released.

The Sonos Beam (Gen 2) and the Sonos Arc are fairly different when it comes to design, with the Beam being a much better option if you’re short on space.

The Sonos Beam upholds the compact nature of its predecessor being just 2.72 x 25.63 x 3.94 inches (H x W x D). This means you shouldn’t have too much trouble finding space for it no matter what your home cinema setup is like.

For the Sonos Arc, you’re going to want a bit more space as it sits at 3.4 x 45 x 4.5 inches (H x W x D). While it is well over a foot longer than the Sonos Beam you should find that it’s just shorter than most 55-inch TVs. If you’re rocking a larger display you shouldn’t have too many problems squeezing the Sonos Arc in front of it – but it will be worth double-checking with a tape measure.

Otherwise, you’ll find that both soundbars are made of plastic, with the Sonos Beam (Gen 2) dropping the cloth grille from the original Sonos Beam. This makes both speakers easy to clean and keep free from dust. As for colors, both are only available in either white or black.

The Sonos Arc offers superb audio performance thanks to its eight elliptical woofers and three tweeters that deliver solid bass and crisp highs. The hardware allows the speaker to make the most of its Dolby Atmos codec – which separates sounds into object-based audio tracks – so that once it has been tuned to the room you’ll get a surround sound experience from just a single source.

Right now we can’t speak for the Sonos Beam (Gen2)’s performance as we haven’t tested it, but by taking a look at its specs we can make some predictions.

While the new Beam will also have Dolby Atmos sound, it might not be put to as good use. For one it loses out on some of the hardware in the Sonos Arc (having only one tweeter and four midwoofers), but importantly it isn’t an upfiring speaker. For ‘true’ Dolby Atmos, you need upfiring speakers that can bounce sound off of the ceiling and back down to your ears (or, even better, ceiling-mounted speakers).

According to Sonos, the new Beam uses “psychoacoustic techniques” to mimic the effect of upfiring speakers – something you might hear referred to as virtual Dolby Atmos – though we’d have to try it out for ourselves to get a feel for how well it works with the Sonos Beam (Gen 2).

Like the original Sonos Beam, the Beam (Gen 2) comes with support for Alexa and Google Assistant, AirPlay 2, and Wi-Fi connectivity, as well as an Ethernet port for hardwiring the soundbar to your router. This is all the same for the Sonos Arc too.

As we’ve said with other comparisons we’ll have to try the soundbar out for ourselves to know anything for sure, but we imagine HDMI eARC support won’t give the Sonos Beam (Gen 2) too much of an advantage over the Sonos Arc.

While we don’t yet know for certain how well the Sonos Beam (Gen 2) will perform, it’s likely that the Sonos Arc will provide a far better audio experience overall – even without HDMI eARC compatibility.

Really your decision will come down to what your budget is. If you’re wanting a great experience that won’t break the bank, go with the new Sonos Beam that looks set to deliver a powerful performance at half the cost. If the price tag doesn’t put you off though, the Sonos Arc will almost certainly serve your home cinema much better.

And if you’re concerned a new Sonos Beam means a new Arc is coming soon too, you might not have to worry. The original Beam is just over three years old while the Sonos Arc has just hit one. While we don’t do anything for certain we reckon you have another year or so before a new version hits shelves.

Not sold on either Sonos device? There are plenty of other brilliant soundbars out there. If you want Dolby Atmos compatibility, check out models such as the Samsung HW-Q950A and the Sony HT-X8500. On a strict budget? The Vizio SB362An-F6 is well worth a look, as is the Sony HT-MT300.