Surface Pro 9 Review: Flipping to 5G Our review-in-progress shows the biggest differences in this generation of Microsoft tablets are the SQ 3 chip and 5G support. 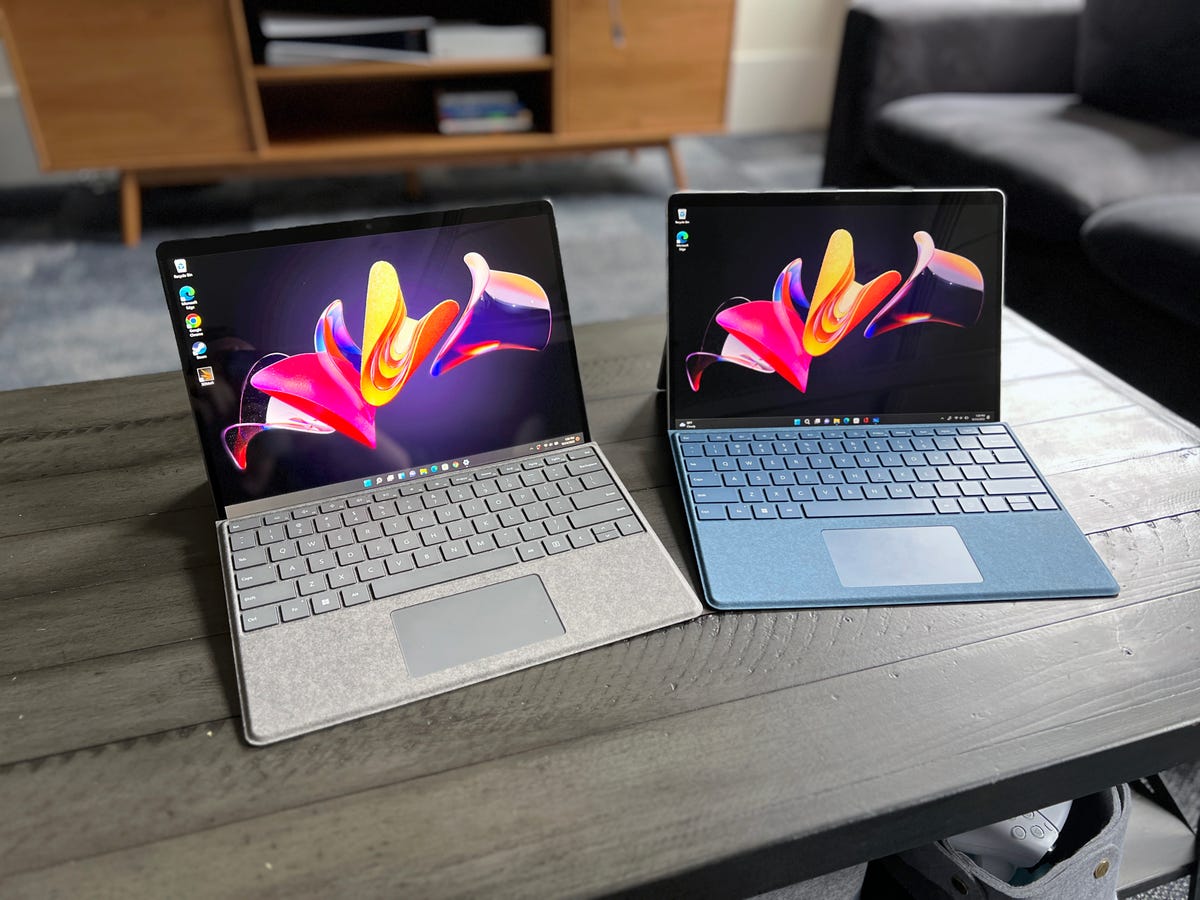 We’ve only just begun testing the new Surface Pro 9 with 5G, so consider this a very preliminary review that will be updated with new performance scores and impressions in the coming days. But as these new systems are available to purchase starting Oct. 25, it’s worth digging into our initial hands-on experience, especially as there’s potential for confusion with the tangled price and configuration options between the Intel and ARM versions.

Yes, there are actually two new Surface Pro systems this fall, not one. They look the same and use the same accessories, but internally there are a couple of big differences.

The standard Surface Pro 9 is a modest upgrade from last year’s Surface Pro 8. It jumps from an 11th-gen Intel CPU to a newer 12th-gen one and moves to a slightly faster type of RAM. And adds some new color options. If you’ve used a Surface Pro anytime in the last few generations, you already know exactly what this is.

It’s the other half of the line, the Surface Pro 9 with 5G, that starts to get interesting. That system shares the same design as the Intel version but swaps the chip out for something called the SQ 3. It’s a joint Microsoft/Qualcomm ARM-based design that’s better suited for laptops and tablets that favor long battery life and 5G support above overall system power.

The SQ 3 includes what Microsoft calls a Neural Processing Unit, or NPU. That allows for some additional camera effects, called Studio Effects, and includes a better background blur, automatic framing (like Apple’s center stage) and “eye contact,” which purports to make it look like your eyes are always looking at the camera lens.

In an interesting feature swap, the former Pro X now lives in the standard Surface Pro body (minus a few vents because the ARM version is fanless). But it’s also brought along one Surface Pro X trait – the lack of a headphone jack. Yes, the Surface Pro 9 joins the growing list of PCs that skip the physical audio connection. The upshot is that your headphones or speaker will need to be Bluetooth, have a USB-C connection or use an extra dongle to connect.

The least-expensive Surface Pro is $999. It only comes in plain platinum, and includes a 12th-gen Intel Core i5, 8GB of RAM and a 128GB SSD. The slate itself (and power supply) are all you get in the box. As always, the must-have keyboard cover is sold separately, as is the stylus.

So far, so good. Here’s where it starts to get even more tricky.

I’ve reviewed nearly every Surface system since the line debuted 10 years ago. Every time I say the same thing: The keyboard cover is a vital part of this device’s efficacy, but it’s always been sold separately. That does not change here.

The least-expensive of those is a $139 version that’s left over from the Surface Pro X.  The standard type cover, using Microsoft’s favorite surface material, soft-but-rugged Alcantara, is $179 in black, platinum, sapphire, forest or red. You can pair any of those with the excellent Slim Pen 2, the official Surface stylus, for $279. That sounds like a lot, but at least you save a few bucks, because the pen alone is usually $129.

Finally, the very cool-looking blue floral design cover from a design company named Liberty is $299 and includes the stylus.

“But wait,” you might say, “I’m upgrading from an older Surface Pro and I can just keep using the same keyboard cover!” Unfortunately, only keyboard covers from the Surface Pro 8 and Surface Pro X will work here, because the connector is different than on older models.

So the end result is that even the least-expensive Surface, if purchased with a keyboard cover and stylus, will be close to $1,300.

The Surface line has always looked sharp and performed well. It remains the best overall example of a Windows-based tablet/laptop hybrid. I attribute that to having a single company design both the operating system and hardware, much as Apple does. In the 5G case, you can even say that Microsoft had a hand in the chip design as well.

The Surface Pro 9 remains a reasonably thin, reasonably light tablet, especially considering its laptop-like specs. The design doesn’t take any risks and also doesn’t jump out as new, like the colorful new iPad does. There’s a little extra bezel around the screen on the top and bottom (the longer sides); on one side it houses the webcam, on the other it helps you hold the slate in your hand without accidentally touching the screen.

The built-in kickstand remains the other best Surface design feature, after the keyboard cover. It moves on a stiff-but-pliable hinge, can open to about 150 degrees and most importantly, generally stays where you put it. On the 5G version, there’s a removable panel under the kickstand to fit a SIM card, and also to access the SSD storage.

A handful of physical differences set this 5G version apart from the previous-gen Surface Pro 8. The two USB-C ports have moved from the right side of the screen to the left side. The power and volume buttons have moved to the top edge. The connector for Microsoft’s proprietary power connection has moved up a bit on the right side. You should still default to using USB-C to charge the device, as that Surface-only power plug remains my least favorite design element, and is prone to popping out unexpectedly.

Performance for the 5G version will really depend on what you want to do with it and what your expectations are, especially for the creative audience at which Microsoft aims the Surface line, where key apps include Photoshop, Illustrator and Premiere.

Our benchmark testing has just begun and we’ll update this review with performance charts in the coming days.

One big advantage of the ARM-based SQ 3 is battery life, and Microsoft claims 19 hours for this version, versus 15.5 hours for the Intel version. Since we’ve only had a single day with the Surface Pro 9 so far, our battery testing is not yet complete, and I’ll update this review with a battery score soon.

I tried out the Studio Effects features on the full HD 1,080-resolution webcam. Face tracking worked well, if you want that follow-you-around effect. The portrait-style background blur is definitely more natural-looking than the background blur built into Zoom or other video apps. I tried the eye contact feature a few times, but could never see much of a difference, at best it looked like a very minimalist TikTok effect that made my eyes a little bigger, but didn’t actually change my gaze. Because you can’t see what happens on the screen while looking away, I had to have a colleague watch over my shoulder for the eye contact effect.

Surf it or skip it

The Surface Pro 9, both the standard and 5G version, is great for tablet-style interactions like drawing and sketching, video viewing and reading. With the optional keyboard cover, it’s a decent device for typing, even if the cover/kickstand combo isn’t especially lap-friendly.

The 5G is great if you need it (doesn’t everyone just tether from their phones?) and the Studio Effects are nice but not necessary. That said, I’d probably go with the 5G version because of the battery life promises of the platform and because ARM-based PCs are finally pretty good overall.

If you have a Surface Pro from the past few generations, I don’t see a reason to upgrade beyond 5G support, but if you’ve been looking to make the jump from a clamshell to a hybrid, this is still the best-in-class Windows example.

Approaching this from a different angle, however, it might be worth looking at the similarly named iPad Pro, just updated for 2022. Combined with a similarly expensive add-on-keyboard, it also attempts to be both tablet and laptop at the same time. Surface Pro is the productivity side of that coin, iPad Pro is the entertainment side.

These are my initial hands-on impressions for now, and the updated full review of the Surface Pro 9 with 5G will follow the completion of our benchmark testing.