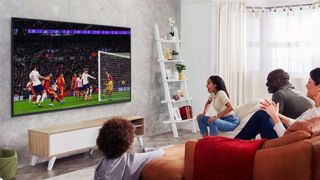 It was already, by far, the cheapest 8K display (television or monitor) available anywhere in the world but that discount – on a product that was launched less than a year ago – gave us a tantalizing glimpse of how mainstream 8K could bring to the hybrid working landscape in 2022.

The price could even fall again for Black Friday 2021, as right now, it costs 40% extra at UK-based retailer Currys.

8K is one of the most hyped technologies in recent times in the world of display and AV. The resolution, which is 16 times that of full HD (1080p), promises to raise motion pictures to a new level, especially when combined with other features like HDR10+.

While businesses and users are still adjusting to 4K, a technology that was unveiled almost 10 years ago, it’s in the entertainment industry that 8K is making the biggest strides. That explains why there’s a grand total of one 8K monitor launched so far worldwide (the grandiose 4-year old Dell UltraSharp 32 8K otherwise known as the UP3218K).

Being the only one in the market means that it can (and does) command a steep premium; this is a still $4,000 monitor (£2,890, about AU$5,455), which is about 10x what a 4K or Full HD monitor of this size retails for. Compare that to the LG NANO956NA which is not only the cheapest 8K television out there but also the cheapest 8K display, end of.

There is also a very good practical reason why LG’s model makes for a great bargain and that’s because it comes with HDMI 2.1 ports while the UP3218K – because of its age – doesn’t sport any. You need to connect it to two DisplayPort connectors to enjoy 8K resolution, something you will get in dedicated graphics cards (like the RTX3080) but not in more modest configurations.

The LG is a 55-inch desktop behemoth that can display more than 33 million pixels and has a full blown 40W 2.2 Dolby-compatible audio sound system as well as a slew of other features including Bluetooth 5.0, four HDMI 2.1 ports, three USB ports, Wi-Fi, an Ethernet connector and even an optical SPDIF audio port plus a solid five year warranty.

Just remember that the NANO956NA will not deliver the same sort of picture quality that you’d expect from a professional, precision monitor. It can do spreadsheets and video conferencing but will struggle with Photoshop.

You will need to have a compatible device in order to make the most of this TV: that means a PC or laptop with at least an Nvidia Geforce RTX 3050 graphics card, one that is paired with the indispensable HDMI 2.1 port which is a much more elegant (and affordable) solution than getting two DisplayPort cables fed into the rear of the Dell.

Which brings us nicely to the second part of the equation. There’s now a number of laptops that offer HDMI 2.1 at a very reasonable price; the Dell G5 5515 Ryzen Edition retails for less than $1,000. True, it runs on the slowest compatible GPU, the Nvidia Geforce RTX3050 4GB, but paired with a 6-core AMD Ryzen 5 5600H CPU, 8GB of RAM, 256GB SSD, WiFi-6 Wi-Fi and a full HD display, it remains a very capable workstation.

2022 therefore could see the rise of a new generation of home offices that run on 8K for less than $2,022. Combined with Microsoft’s FancyZones, it paves the way for virtual desktop galore that could well climb into double digits without having to resort to multiple monitors and the sort of logistical nightmare (stand, cables, power supply etc) that comes with it.

Remember, a single 8K monitor can replace four 4K or 16 full HD displays and 55-inch – should you have the desk space – is the perfect diagonal size for handling everything that a busy office day can throw at an employee living the hybrid working dream (including, in the UK, free terrestrial and satellite TV). Just make sure that your fancy standing desk can support the weight of a 55-inch display.