Outside St. Louis, on the grounds of an army base that used to train nearly every soldier west of the Mississippi River, is an old building with a new purpose. Inside are hundreds of old and not-so-old telephones on display, from a replica of Alexander Graham Bell’s first working phone to the cellphones preceding the smartphones we carry around today.

The Jefferson Barracks Telephone Museum is a modest two-story brick building that used to house military officers before it fell into disrepair. It’s been completely refurbished by a band of dedicated locals, retirees who all worked at Southwestern Bell, which dominated St. Louis for most of the 20th century as the preeminent phone company in the region. The industry veterans run the gift shop and give tours of the museum’s four rooms of phone history.

My advice: Take the tour. The museum is a window on a time when communication was a communal and almost shared experience — when families overheard calls to relatives, or people listened to the background noise behind whomever they were calling. Before the automatic telephone exchange (one of which is on display in the museum, in full working order), human operators linked people via switchboards by physically connecting a cord carrying the voice of the person calling to one leading to the recipient. Until direct dialing was adopted, privacy was difficult, explained Carol Johannes, executive director of the museum.

“The operators had the ability to listen in on any and all conversations, as they desired,” Johannes told CNET over email. Domestic calls weren’t much more discrete. “Many households had ‘party lines,’ which means they shared their telephone line with other families. People on party lines could listen in on each other’s phone calls, so privacy was a little difficult, to say the least.”

As I stared at rows of phones older than any member of my living family, I realized that, with the exception of the odd hotel room phone, the only phones I’ve used since graduating high school have been my own personal cell- and smartphones. I’d bet that few people reading this article use a communal phone outside of work anymore. That shift to more personal, intimate conversations, shared via video, text, instant message and, yes, even traditional phone calls, has dramatically transformed our expectations of privacy.

I was fortunate to visit when Johannes, who’d rallied her fellow Bell veterans to refurbish this facility and was instrumental in its creation, was serving as tour guide. As she told me and a few other people about phones from the last century, I noticed a stark difference between the exhibits and the smartphone I was using to take notes and photos: Beyond the obvious technological advances, those old phones were placed in homes and stores, but my smartphone was mine.

It was a surreal realization while surrounded by phones used by dozens, hundreds or thousands of people over their life spans, and while confronted with what that meant for how we connected to each other between the Industrial Revolution and the Information Age.

For instance, Johannes pointed out that candlestick-style phones have a removable mouthpiece, which people would swap out for their own personal one to avoid the spread of droplet-based contagions of the day like diphtheria and polio. She also noted the special chairs with clasps on the back so switchboard operators, who were generally women, could hang up their purses and bags.

But nothing spoke of our transition from communal to personal like color — because until the 1950s, virtually every phone was black. Telecom companies like Southwestern Bell rented out phones to people and didn’t offer color options. Even putting a decorative cover around your home phone was forbidden, as they were telecom property that customers leased, and if a repair technician saw a cover they’d confiscate the whole phone, Johannes said.

That lasted until the 1950s, when the Western Electric 500 — a phone so iconic, it’s the basis for the phone emoji — came out in multiple colors. Subsequent decades saw a cornucopia of phones in exciting hues and styles, a liberation from the gadget’s pragmatic monochrome beginnings.

New smaller designs appeared, like the ubiquitous Princess phone, which had such a thin base and handset that both together were hardly bigger than a loaf of bread, as well as the avant-garde Ericofon (aka the cobra), which combined handset and dial in a single unit that was perfect for groovy 1960s home design chic. Advances in miniaturization also packed components into phones half as large.

These (relatively) compact phones were easier to carry into other rooms, representing the first steps toward a more private phone communication experience. And they were comparatively affordable. Phonemakers started designing models specifically for the growing teen market. Phones were transforming into products of desire, and by the 1970s, consumers finally broke away from leasing telecom phones and started buying their own, en masse.

In other words, phones started belonging to individuals.

The museum’s glass cases held dozens of these dynamically designed phones, some of which I started to recognize — my family had a touch-tone phone when I was growing up in the early ’90s. But the museum’s fourth and final room saved the best for last: a wall of novelty phones, which let you dangle a phone receiver on Winnie the Pooh’s arm or pull out the front half of R2-D2 when making a call. By the ’80s and ’90s, people were really making phones their own.

The other side of that fourth room was filled with early cellphones, and that’s where folks who’d been silent for most of the tour lit up with joy. They pointed at Motorola’s StarTac flip phones and Nokia candy bar handsets, cooing and laughing. These were the phones they’d carried with them every day, conduits to relationships and jobs long past. And unlike the older rotary and touch-tone phones people remembered from their homes growing up, the cellphones had been theirs and theirs alone.

I haven’t relied on a public or even family phone to make a call since I got my BlackBerry Storm in 2009. My smartphone isn’t a public utility or communal device, it’s a personal sidekick, a Star Trek communicator through which so much of my life flows. We treat phones differently now. If someone asked to use my phone, I’d hesitate, as if someone wanted to borrow a limb.

The museum is full of ways people strived for privacy in the public phone age, from phone booths with doors to the Hush-A-Phone, an accessory looking like a pair of inverted cones, which slipped over phone mouthpieces to quiet what you said into the phone and keep it out of nearby ears. Like the aforementioned color covers, Bell wasn’t happy about this add-on and sued to get it banned from use — but the subsequent 1956 ruling in Hush-A-Phone v. United States in favor of the accessory was a watershed moment for individual communication rights. It contributed to the breakup of Bell’s monopoly and established the right for individuals to use third-party technology on their end of the phone network — tech like modems, which paved the way for the modern internet.

Now we tap that internet on our smartphones to connect with people using a plethora of chat and video apps, many of which are end-to-end encrypted. I have a lot more control over whether I’m overheard, and aside from making calls from my hotel room to the front desk, I won’t have to use any but my own phone for the rest of my days.

And in the end, more autonomy over how and when I communicate is for the best. The aforementioned automatic telephone exchange on display in the museum is a good example. When Kansas City, Missouri, undertaker Almon Brown Strowger discovered he was losing business because the operator was redirecting calls to her husband, an undertaking rival, Strowger invented a machine in 1889 to automatically route calls. No human fuss, no interference.

So it’s a pleasure to walk in the St. Louis Telephone Museum and look back in time, from a working example of the earliest automated switchboards to the AT&T Picturetel, which debuted at the 1984 World’s Fair as the first commercial video phone — a concept so new it unnerved people who tried it out, Johannes said during the tour. Phones used to be communal gateways connecting people over wires, and now we have our own supercomputers in our pockets stuffed with personal apps and data.

But it’s also a reminder that the privacy surrounding our phones is a phenomenon that’s only a few decades old, and that our relationship with those mobile devices has radically changed from the early days of Ma Bell.

Maybe that means we’re a little too precious about our expensive pocket computers — a cracked screen can ruin our week — but having our own window to the world means we get to communicate on our terms. This museum gave me a new appreciation for the level of privacy our little phones afford us, and how such perspectives are lost without preservation.

“Since many people are relinquishing their landlines, more and more vintage telephones are being destroyed, and once they are gone, there’s no getting them back.” 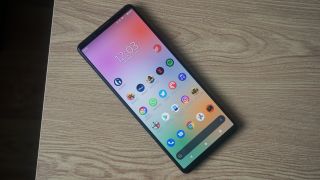 US lawmakers reach deal on spending bill, but hurdles remain