Want the best live TV streaming service? This is the one to choose Find out why YouTube TV won an Editors' Choice Award. 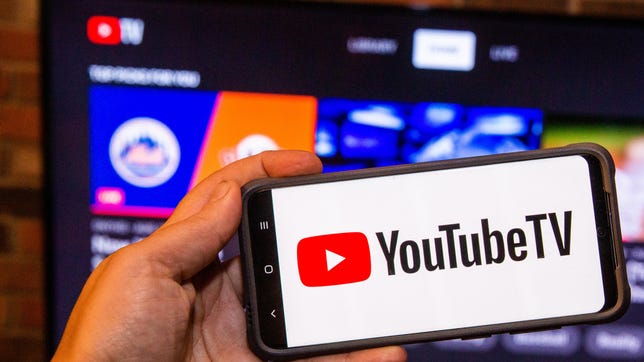 In the years since YouTube TV first launched, Google’s live TV streaming service has consistently proven to be one of the best, with an excellent channel selection and an unbeatable user experience. While the service has since almost doubled in price, it’s also added a bunch of features and continues to be a better choice than any of its premium competitors, including Hulu Plus Live TV, FuboTV and DirecTV Stream.

YouTube TV’s main strength for cord-cutters is its sheer number of channels. It now offers 79 of the top 100 networks, the most of any streaming service, a count that includes numerous cable staples plus all four local networks — ABC, CBS, Fox and NBC — and local PBS stations nationwide.

Beyond channels, YouTube TV is easy to use: it’s slick and speedy on a variety of TVs and mobile devices. Its cloud DVR is the best in the business, with unlimited storage and pretty much all the capabilities of a hardware DVR. The service also offers a 4K streaming upgrade — for an additional $20 monthly — which includes unlimited simultaneous streams and downloadable DVR recordings.

The big snag is the price, and if you’re a cord-cutter, the cut-down Sling TV Blue at $35 a month is the best way to save money. At the other end of the spectrum, Hulu Plus Live TV is an excellent alternative and while it’s going up to $70 soon, it also throws in the a modified Disney Bundle. That said, if you’re used to the myriad channels and easy DVR of cable, then YouTube TV’s base $65 package is worth the money. It’s slick, it’s easy to use and represents an excellent value.

What do you get?

YouTube TV is different from YouTube, the free video service with more than 2 billion users a month. YouTube TV offers an experience similar to cable TV, with live channels and on-demand content available on a variety of devices. It works with Apple TV, Roku, Android TV, Chromecast and Amazon Fire TV along with numerous smart TVs, phones, tablets, game consoles and web browsers.

The service operates in much the same way as its competitors — there’s a program guide, a DVR and dozens of channels. But what really separates YouTube TV from other premium ($60-plus a month) services such as DirecTV Stream, Hulu Plus Live TV and FuboTV? Let’s take a look.

YouTube TV’s channel selection is excellent, with more from CNET’s list of 100 top channels than any other competitor, though Hulu is catching up. That said, more channels doesn’t necessarily mean more of what you want — some services such as FuboTV lean heavily on sports, while others are increasingly wide-ranging. It’s best to check the list at the end of this article, which compares individual channels across services, to make sure you’re getting the channels you want. While competitors include a number of channel upgrade packages, YouTube includes everything for the one price, though there is one exception which we’ll explore in the next section.

Last year, Google introduced two new features, namely 5.1 surround where available for all subscribers (most competitors are only in stereo) and an expansion of the DVR search which can now pick out specific sports (most useful for events such as the Olympics).

YouTube TV’s user interface is fairly simple. There are three top-level tabs broken into Library, Home and Live. Library is where your DVR content lives while Home is where both featured and live thumbnails appear. The third, Live tab is a familiar-looking program grid which displays both currently playing and upcoming shows. You can search for content from the top of any page, making it relatively easy to jump straight to the programming you want. You can also perform searches with a compatible voice remote or Google Assistant. While this is easier if you have an Android TV streamer, you could also perform searches on your Google Nest Mini and play it on a Roku, for example.

The DVR works as expected and breaks up recorded content into manageable chunks such as recently recorded and most viewed. The DVR also includes the ability to rewind and fast-forward freely through recordings, even ones that aren’t yet completed. The Roku interface offers a 15-second skip by default, while the Apple TV’s control system via the Siri Remote is even better. You can use the touchpad to scroll through videos — and it’s glorious! It’s so much fun, and thumbnails make it relatively easy to get to the part you want.

In the past, when a show appeared in a network’s on-demand library, it would automatically replace the version in your cloud DVR, means you’d lose the ability to fast-forward through commercials. YouTube TV says it got rid of that restriction in October 2018, but some CNET readers have complained that it still occurs at times. Additionally, YouTube TV’s DVR is not truly unlimited — the shows will expire after nine months, but this is still a lot longer than the 30 days you get with most rivals.

While Google used to integrate YouTube into YouTube TV — with trailers and related content on a show’s About page — this appears to no longer be the case. However, the company is continually tweaking the interface, and we may see YouTube content appear again at some point.

In a word, no. There’s simply not enough content right now to justify the upgrade, but there’s one new feature which may prove the most useful, especially for travelers. In pure content terms, though, the top tier of Netflix is $18 per month and offers thousands of hours of 4K content alone, plus offline viewing. In further contrast, the $65 FuboTV service includes 4K content for no extra charge.

Introduced to coincide with the Olympics, YouTube TV’s $20 4K Plus add-on offers benefits including 4K sports and on-demand, an unlimited number of simultaneous streams, and a newfound ability to save DVR recordings for offline mobile viewing. If you’re a frequent flyer or subway rider, the ability to watch prerecorded shows without an active connection could be a real boon.

As per YouTube TV’s 4K page, the additional content includes shows from Discovery, ESPN, Fox Sports, FX, Nat Geo, NBC Sports and Tastemade. The interface includes a 4K button to help find content, but at present this doesn’t constitute enough to stick around for. In addition to a handful of shows, there’s also Thursday Night Football, “live” Premier League soccer, and college football on ESPN. The NCAA adds a bunch of 4K content, but at the moment it still looks like FuboTV is the choice if you want football, 4K or a combination of the two.

The content that is available, such as the cooking show Make This Tonight and the travel competition show Basic Versus Baller, do look good, with better contrast and color than regular broadcast TV.

Think of it as a cable replacement

When it originally appeared YouTube TV was a very attractive way to save money over cable. Yet as the service has piled on more channels, it has also added further costs. So, when you take that $65 monthly fee and apply it to the $50 you’re already paying for internet, it means you’re paying over $110 a month. Many cable TV providers will give you a TV-and-internet bundle for around the same money.

Prices vary a lot, of course, and with cable, you probably have to pay rental equipment fees, taxes and other extras. And cable providers usually reserve the best bundle pricing for people who sign a contract. The same goes for “streaming” offerings, such as Comcast’s Xfinity Flex.

The reason you want to cut cable in the first place remains. Like Hulu with Live TV, Sling TV and others, YouTube TV is contract-free, so you can cancel at any time. Streaming services also have other advantages over cable. They’re easier to watch on phones and tablets, for example. At $65 per month, however, you’ll have to be coming from a relatively expensive cable bill to realize substantial savings with YouTube TV.

If price is no object, YouTube TV is my favorite live streaming service, with a huge array of entertainment options and one of the best DVR/search combos on the market. It offers more channels than anyone else and the inclusion of 5.1 surround is great for sports and movie fans alike. If you don’t want to be beholden to a traditional cable company it’s a great alternative.

That said, $65 a month could be a tough expenditure for some people, and yet without a contract to worry about, you are free to jump ship to a better deal at any time. That extra $20 on top is simply a bridge too far for so little 4K content, even if unlimited streams and DVR downloads are useful for extended families or travelers.

If you’re a hardcore cord-cutter and determined to save money, Sling TV Blue offers a compelling alternative, especially when paired with an antenna or an AirTV 2.

Below you’ll find a comparison of the top 100 channels offered by a few of YouTube TV’s competitors. For more information and comparisons with additional services, check out the full article.