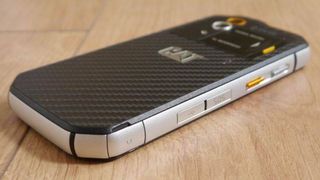 America’s construction machinery maker Caterpillar, widely known as CAT, has launched its rugged smartphone, the S60 in India. The phone was initially launched at the Mobile World Congress 2016, which was held in Barcelona almost a year ago.

Like most of the CAT smartphones, the S60 also emphasises on ruggedness. It comes with MIL-STD 810G military durability rating, which makes it immune against extreme temperatures ranging from -25 degree Celsius to 55 degree Celsius. Moreover, it can withstand drops from up to 6 feet.

Other than the strength, the main highlight of the CAT S60 is its FLIR Lepton Thermal Microcamera Module with 13MP sensor with dual-LED flash on the rear. FOr those who don’t know, FLIR is the global leader in thermal imaging technology. On the front it has a 5MP camera for video calls and selfies.

According to the company, the thermal camera would help users to detect heat loss around their surroundings. It actually visualises heat that cannot be seen with naked eye. It can also pick up heat and measure surface temperature up to a distance of 30 metres, and even see through objects like smoke.

The CAT S60 comes with IP68 certification, that makes it waterproof up to a depth of 5 meters for an hour. Not just water but the smartphone is also rustproof and shockproof. On top of everything, it also has a dedicated SOS button which when pressed, sends your location details to selected contacts.